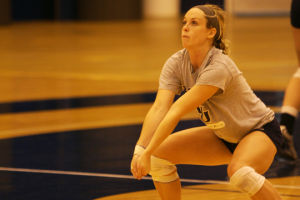 It’s a Wednesday afternoon. A group of 18 women run up and down the court in Lee Arena, all the while bumping, setting, spiking and diving. Among the 18 faces, one has a larger smile than the rest.

Molly Smith, a senior libero and defensive specialist for the Washburn Lady Blues volleyball team, knows this season is her last shot, and she’s soaking it all in. However, this season is a little different than the prior three.

“I definitely play for her because she really wants me to finish out my senior year and she definitely inspires me to try hard and play everyday,” said Smith. “She just wants me to be happy and not to think about stuff.”

Smith said the team has been her family at Washburn, and they had been a huge support system for her. They even made wristbands for Smith’s mom.

“Volleyball takes my mind off of everything,” said Smith. “Volleyball is so much fun, it’s what I love to do. It makes my mom happy to see me play and I want to do whatever makes her happy. The girls especially, you know, my team and my coaches are the biggest support group ever and I would never be able to continue playing and not thinking about it if I didn’t have such a great support group.”

However, she almost ended up playing a different sport at a different college. Smith, a graduate of St. Thomas Aquinas High School in Overland Park, Kan., came to Washburn in 2007 after verbally committing to play soccer with Indiana State University. Smith played defense and midfield for Aquinas, which won two state championships. She ultimately decided, however, to attend Washburn and play volleyball, a sport she also won a state championship in.

“All my family is from Kansas City and a lot of them live there,” said Smith. “My brother and sister went to K-State and I’m really close with my family so I definitely wanted to be closer to home and [Indiana] was about six or seven hours [from home] so I just decided it was not for me.”

After earning several awards for her scholarly efforts and finding her place in the top 10 list for several career statistical categories at Washburn, Smith is embarking on her last year of eligibility.

“I’m definitely sad,” said Smith. “I mean, it’s the last preseason and the last preseason trip and it’s kind of bittersweet. The girls on the team have become like my sisters so it’s going to be really sad when I don’t spend three hours a day, five or six days a week with them.”

So far this season, Smith has thrived. At last weekend’s St. Mary’s Invitational in San Antonio, Texas, Smith helped the Lady Blues go 4-0, improving Herron’s record in season-opening tournaments to 36-0. She led the team with 50 digs during the weekend tournament, including 20 against St. Mary’s.

“We take every team like we’re going to get their best game. We’re gelling a lot better and the team chemistry is great on and off the court,” said Smith. “I love the incoming freshmen, they’re gelling with our team really well, so I think that these teams coming up next week are going to be even more challenging and it’s going to be a good test for our team.”

Head coach Chris Herron has been impressed with her effort on the court. He said she came into her final season in better shape than she was last year, mainly thanks to a workout regimen she had with her dad during the summer. Herron said her mom’s affliction hasn’t affected her outwardly, even though he knew it had affected her inwardly.

“She’s always been a great, happy kid,” said Herron. “She’s been a happy kid ever since she’s been here, so I haven’t noticed it affecting her play at all.”

Herron said the hardest part was knowing when to talk about the situation and when to stay silent.

“I think the biggest thing we try to do is we’ll talk about it if Molly wants to talk about it,” said Herron. “If you bring it up, you’ve got to walk that fine line, because if you don’t ask about it at all then you seem uncaring and if you talk about it too much then it’s on her mind even more frequently than it would be normally. It’s just a fine line that each of us are trying to walk.”

While her personal goals are to be consistent and step up in big moments, the team ultimately hopes to make a deep run in the NCAA Tournament this year after a second round loss last season.

“I definitely think making it to the Elite Eight [is a goal] because once you get to the Elite Eight, who knows what could happen?” said Smith. “It’s been a goal every single year, but it’s obviously going to mean a lot more now since we’re seniors and then ultimately winning a national championship, because that would be great.”