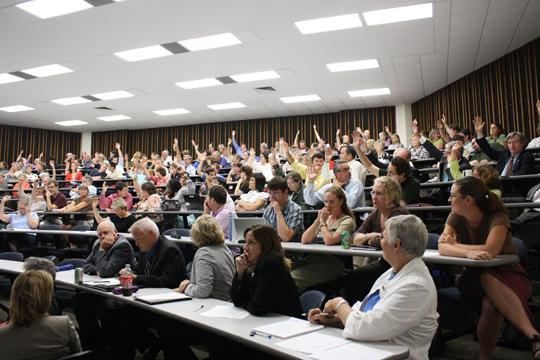 “Today you will vote to replace the current nine general educational skills with the proposed five educational outcomes…that were created based on the information obtained thru faculty workshops,” said Tate. “I’m actually excited about the new outcomes because they closely align with the outcomes outlined by the Kansas Board of Regents which will be voting on their set of outcomes at their upcoming September board meeting.”

After the wellness presentation, the old business of adopting the first portion of the new general education proposal was debated in a contentious debate in which various members of the faculty voiced concern over the piece meal nature in which the process was moving forward. With the main reservation revolving around what effect successive portions of the general education proposal might have on previously adopted portions of the plan.

After some speaking back and forth between opponents and proponents of the plan it was finally decided to send the proposal back to the academic affairs committee for further work.