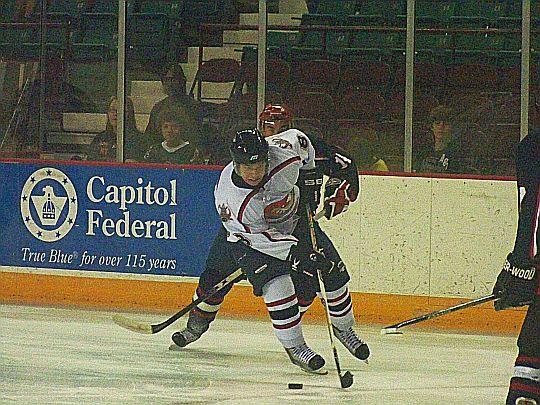 Nate Milam, a returner from last year's team, will help lead the younger players this season. Milam had a goal in Sunday's match.

After a shaky start to the preseason Friday night, the Topeka RoadRunners certainly picked up their game for Saturday and Sunday’s matchups.

Pulling off a close 3-2 victory against the expansion Amarillo Bulls, the RoadRunners came back Saturday with a 5-0 shutout victory. On Sunday, Topeka gave up as many goals as they scored Friday night but picked up the offense with seven goals to defeat the RoadRunners alumni in the second annual alumni game.

With scoring from multiple players, including a hat trick on Sunday from newcomer Scott Snyder, Topeka found their offensive game quickly. With two goals also from newcomer Kevin Novakovich, Topeka head coach Scott Langer was overall satisfied with the weekend as a whole and how the team performed.

“We’re just trying not to develop any bad habits at this point,” said Langer. “Obviously, you see how the intensity picked up there after about five minutes into the game. You know, we got some secondary scoring in there from Scott Snyder and some of those young guys. It was a good weekend and a lot of fun to watch to watch those [alumni] guys compete too as they pass that torch over.”

Snyder was also pleased with his team’s effort and progression over the weekend. One of the main satisfactions for him was the way he played Saturday and Sunday.

“It was a lot of fun, especially after I didn’t even dress on Friday night,” said Snyder. “So, this is a good way to turn it around for myself at least.”

The alumni team consisted of team members as recently part of the RoadRunners as last year, as well as players who played in the franchise before it moved to Topeka. They developed an early lead Sunday, but less than two minutes later, Topeka picked up two goals to take a 2-1 lead to first intermission. The alumni later tied the game at three, but the RoadRunners then countered with three straight goals to take command of the game.

Going from three, five, and seven goals in each game respectively, even Snyder was a bit surprised by the firepower his team released in Sunday’s game. Topeka lost to the alumni team 1-0 last season.

“We’re getting good chemistry going on. It’d be nice if we could keep the trend up and get seven every night. I didn’t really it coming with seven goals, especially after the game last year.”

But regardless of the score, Sunday’s game was most importantly about the relationship the alumni players have to the younger players this season, according to Langer.

“That’s what this is about is to have everybody involved, no matter how long they played for our organization,” he said. “You know, we have a strong culture here and to have those guys involved and see how our young guys represent themselves is a key. We just want to keep that family going.”

Topeka will continue its preseason matches Friday and Saturday at Pepsi Ice Midwest in Kansas City as they take on the expansion Corpus Christi Ice Rays. Puck drops at 7:05 p.m.