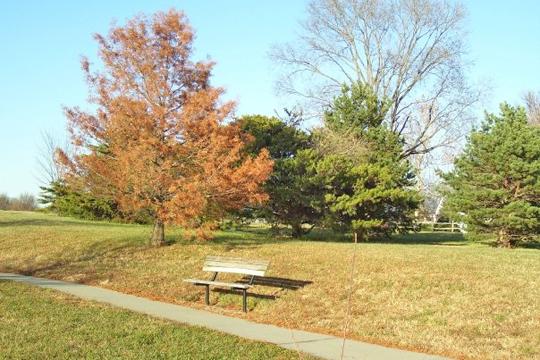 MacLennan Park, located near S.W. 6th and Fairlawn near Cedar Crest, offers bike trails three mountain bike trails are 1.8, 1.4 and 0.7 miles in length and wind through terrain ranging from heavily wooded to grassland.

The city plans on expanding its amount of happenings and making a more enjoyable city.

“Well, one of the things that I think is really exciting here is what activities are coming here in the near future,” said Randy Speaker, deputy city manager.  “We have a consultant from Omaha, Neb. that is coming down and helping us to connect and do a bike-route plan for the entire city.

Speaker noted a difference between trails and bike routes.  The bike routes are generally used by people riding their bike to and from school, work and activities.”

The city is in the process of connecting all of its trails.

“For instance, there is [a trail] up north that connects Garfield Park up to 24 Highway now,” said Speaker.  “There’s also the Shunga Trail that follows the Shunga, and so we have a really neat trail system started, but the exciting thing is it’s going to evolve also into a bike route system.”

Not content with just land travel, the city is also taking on water voyages.

“Also, [Sept. 4], we are dedicating our first boat ramp that will have public access down on the river that is up directly what would be east of sunflower soccer,” said Speaker.  “People will be able to launch boats there.  Also, it’s set up for portage.  So that’s a neat little thing for people who like to canoe.”

Speaker also points out the parks system with basketball, baseball and even swing sets.

“Gage Park is a pretty phenomenal place for outdoor activities,” said Speaker.  “Different facilities can be rented or there are open areas, the zoo is there, where there’s also a lot of activities.

“We have a system of parks as well as we have several community centers that people have a variety of activities that people can participate in.  Several of them have swimming pools, such as Garfield Park up north and Crestview out southwest, and those are some of the general activities that take place there as well as basketball.  They have open gym times in all those, too.”

“It’s a lot of the community coming together and having a forum upon which they can give their opinions,” said Speaker.  “And of the areas that we’re pushing to get is that of young people to get involved, and one of the things we’ve found is that they are looking for some meeting places, gathering places, to be created here in the town, and one of being in the downtown area.

“That’s not something government completely does.  There’s a lot of the private sector. There are even some people coming in [Sept. 3] to talk about a multipurpose baseball stadium to be built downtown, so that would be the kind of place where more than baseball could take place there, but a lot of activities.”