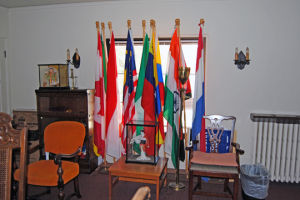 Neil Simon once wrote a song about, “a stranger in a strange land.” For international students, one fixture of the Washburn community that has helped make the school less strange is finally taking time for herself.

Bobbie Anderson began her career at Washburn University 15 years ago. She was a lecturer for Washburn’s Intensive English Program (IEP) as well as the director and coordinator of the program.

The IEP involves a series of classes taken by international students to assist in the development or improvement of their English speaking skills before they’re accepted into a degree program at Washburn. The program also gives students a chance to learn how to interact with people within the community and jobs.

Anderson received her education from Kansas State University, graduating with a Masters degree in development of continuing education. Before Anderson ever went to college, she knew she wanted to work with international students.

“I guess all my life I’ve heard of working with internationals or overseers, it was set for me, and I’ve always wanted to do it,” said Anderson.

A few of her former students recall fond memories of her as their teacher.

“My favorite thing about Bobbie is probably that she is so detailed with grammar and I think that helps us international students a lot,” said Rizki Aljupri, sophomore accounting and finance major.

According to Rex Dong, freshman, and Ton Chen, junior, Anderson gave lots of homework, but it really was beneficial for both of them. Dong said that while Anderson may have given him and his classmate’s sufficient amounts of homework, it helped them learn a lot about the English language.

“I have a freshman composition class now, and after taking Bobbie’s class it makes it easier for me to understand English,” said Dong.

While Anderson may have not taught Intensive English in any other countries besides America, she has had the chance to travel to countries such as Guatemala, Mexico, Sweden, Norway, China, Spain and Japan.

“These students are already the best thing about teaching here, so getting to travel to their homelands and meet their families is just great” said Anderson.

Speaking about retirement, Anderson thought that it’d take some time to get used to retirement. Even though she has retired, Anderson is still keeping herself busy by taking an interest on different activities on campus and by becoming a student herself at Washburn.

“I wish her happiness and a great life,” said Chen.

Some other students will miss different aspects of Anderson.

“I will miss our arguments about certain things in English the most,” said Aljupri.

Anderson’s parting words to students and staff were reflective of her time at the university.

“Working for Washburn was a great deal,” said Anderson. “All the students, staff and faculty were always friendly.”