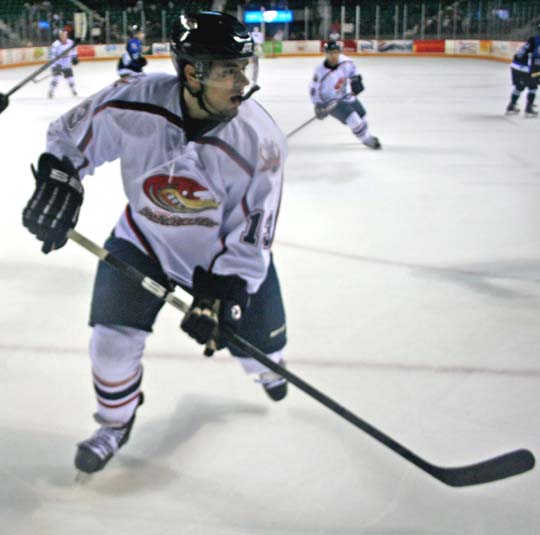 The offensive outburst only lasted one night.

A day after firing away at St. Louis Bandits goalie Jimmy Hanby and burying five goals in the final period to win 6-3, the Topeka RoadRunners couldn’t replicate the same effort, falling 3-0 Saturday night at Landon Arena.

In Friday night’s match up, Topeka (8-4-2) took an early lead 14 seconds into the contest when Michael Hill buried a rebound off a Nate Milam shot. But only 18 seconds later, St. Louis’ Chris Ciotti tied the match at one, deflating the RoadRunners’ early momentum.

Michael Hill scored another early-period goal 34 seconds into the third period. Halfway through the third period, the RoadRunners were hit for a four-minute penalty, but two shorthanded goals by Jordan Davis and Nate Milam respectively while down a man gave Topeka a 4-3 lead.

A goal at 13:27 by Andrew White and a late empty-net goal by Daniel Dupell finished off Friday’s match.

Early Saturday, Topeka looked like the same team who had outplayed St. Louis in the third period the night before. But nevertheless, 4:59 into the game, Brad Smith found the back of the net, giving the Bandits a 1-0 lead. Topeka lead in shots 10-2 after the first period.

During a late second period Topeka power play, Drew Slaton found himself on a breakaway and flipped the puck backhanded into the back of the net at the 16:46 mark of the second period to increase the Bandit lead to 2-0

For Topeka head coach Scott Langer, it was frustrating to come out firing and be trailing.

“I thought system wise, we were really good the first two periods and to be down was frustrating,” said Langer. “Our first goal was really soft and then a pretty big breakaway takes the wind out of your sails. They capitalized on a few mistakes. We only gave up 13 shots and got shut out. I don’t know how many times that’s going to happen.”

A third period shot appeared to go off the crossbar and stay out of the goal, however the goal light came on, but play did not stop. Upon stoppage of play, head official Lucas Martin spoke with the goal judge and it was confirmed a goal at 3:11 to make it 3-0.

Langer was still in question following the play and noticeably frustrated by the call.

“The third goal never went in,” said Langer. “I’m not even sure how anyone can get that wrong. That amazes me. At that point, the game’s over and it’s in the hands of the official and the off-ice official who made that call. But we have to support our goaltending and our defense more. We’re only allowing 13 shots. We’ve got to score some goals. We weren’t tenacious enough on the rebound tonight.”

Topeka fired nine shots in the final period and 23 on the night in the loss. Rasmus Tirronen picked up a win and a loss on the weekend, giving up six goals on 37 shots overall.

Langer knows he’s got a young hockey team with a lot of new players and doesn’t expect the team to excel overnight.

However, he wants to see change happen promptly.

Topeka returns to the road this week to take on the Springfield, Ill. Junior Blues. They then return home the following weekend to play the New Mexico Mustangs, which begins a six-game homestand.