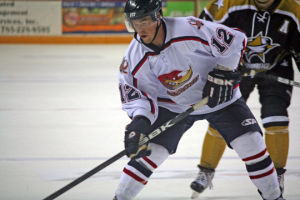 In their home opener, Topeka (5-2-0) struggled for shots on goal and dealt with turnovers throughout the game en route to a 3-2 overtime loss to the Texas Tornado (3-2-2).

“We learned the hard way there,” said Langer. “We didn’t manage the puck. A lot of the stuff (the Tornado) generated were off blatant turnovers. When you spark a team like that and hand pucks to them, they’re going to hurt you.”

Ryan White gave Topeka an early lead at 7:17 of the first period when he took a pass from Jacob Poe and one-timed the puck past Jake Stafford. But just over two minutes later, Rock Einerson matched White’s powerplay goal with one of his own to tie the game at one. Topeka headed into the first intermission with only four shots on goal, on their way to only 18 for the game.

While nerves may have been initially present for the team, Langer contributed much of the loss to the team’s performance.

“I attribute it to effort and willingness,” he said. “You got to be willing to get through a big team like that — go the net and put your ass on the line. We just didn’t have that (effort), and they did a good job of just waiting for us to turn pucks over. Combine those things, and it’s not going to be very successful.”

The second period yielded only more turnovers and rough puck handling, but despite being outshot 16-10, the score remained tied going into the third period. But in the third, Einerson scored a fluky goal at the 6:51 mark to give the Tornado a 2-1 lead. Michael Hill tied the game for ‘Runners at 10:52 and Topeka’s goaltender Eric Rohrkemper came up with some big saves to keep the scored tied late in the third period, leading to overtime.

Only 42 seconds into overtime, Einerson completed his hat trick leaving the 2,372 fans with little to cheer about.

“He’s (Einerson) got nine goals in eight games, so I’m pretty sure we did our homework on him,” said Langer. “You know, you give someone that much space and time, they’re probably going to hurt you.”

Even with the loss, Langer knows his team was lucky to even be in contention down the stretch. It was Rohrkemper’s play that kept Topeka within distance of victory.

“The game goes into overtime just because of Eric Rohrkemper, let’s just be honest,” Langer said. “He had to face some odd-man rushes that he probably had no business stopping. They easily could have blew us out tonight with our effort.”

Topeka can’t dwell too long on the loss. The two teams play again tonight at 7:05 p.m.

“We’ve got to show up ready to go and understand that it doesn’t matter if you’re young or anything,” said Langer. “There’s pride in this arena, and when you show up here, you’ve got to put everything on the line.”