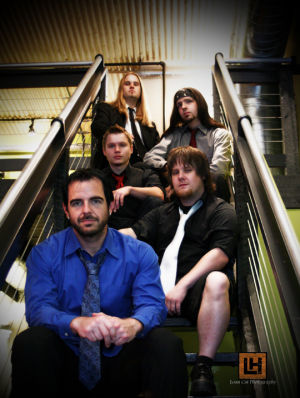 Despite a late start due to technical difficulties Saturday night, The Students didn’t skip a beat.

Alpha Delta hosted a reunion concert for the band, that is made up of Alpha Delta alumni for the Alpha Delta fundraiser at the Roostertail, 830 N. Kansas Ave.  The fundraiser was to help fund maintenance work at the Alpha Delta fraternity house.  Livy High, a local alternative rock band from Wichita, headlined the show.  The two bands together put on a show that kept the crowd happy all night, and left them wanting more.

Gregg Shaeffer, lead rhythm guitar and vocals, started The Students in the early 1980s with a couple of fraternity brothers who shared his same passion for music.  Washburn students loved their Rockabilly feel and would book them for concerts on campus and around town in various bars.

“These guys were a legend on the bar scene,” said Trey Fischer, Washburn alumnus. “If you’ve ever watched the movie ‘Animal House,’ these guys would have played at the Delta Tau Chi house.”

When the band first started playing together they needed a synthesized drum, until they found Matt Griswold who wasn’t at the show. Marc McGee was lead vocalist in the original band and was unable to make it as well. The remaining two members, Shaeffer and “The Moose” Chris Mitchell on bass guitar rocked the house.  With his sunglasses and jokes, Mitchell was entertaining while the crowd waited on technical issues to be solved.

“Our music is better than it sounds,” said Mitchell. “That is the band slogan!”

Despite what Mitchell said, many fans from their college days showed up to support the band. They hadn’t played together in 25 years, but their sound didn’t suffer.

“They were really great,” said John Henderson, junior Alpha Delta and English education major at Washburn. “Me being [from] a younger generation myself I thought they sounded really good.”

This was the first Topeka show for Livy High, and the turnout was a packed house. Loyal fans from Wichita joined them for the show, and sang along with every song, they also helped promote the band to future fans.  Jett Miller, guitar, keyboard and backup vocals, has been with the band for the last year and says they have come a long way. When he originally joined up with Jason Carroll, lead vocalist, all the songs were written by Carroll.

They have been collaborating as a band now and are writing new songs together, with Carroll writing the lyrics and some of the music.

“It might be awhile before we have our next album,” Miller said when asked about future music from Livy High. “We will keep writing new songs and playing new songs.”

Miller says Livy High doesn’t have very many live shows under their belt, but plan on having more in the future. Their set is very elaborate, they have a light show, a fog machine, sky high amps, a stage for their drummer and other equipment so it is difficult and expensive to get it moved around.  They plan on returning to Topeka and surrounding areas as soon as the opportunity arises.

“We pride ourselves in quality over quantity,” Miller stated. “[The couple of] shows we have done have been very successful, 200 to 400 fans each time would show up.”

Livy High is on Facebook, and there are videos of songs on YouTube. Mark Aguirre is a dedicated fan who goes to every Livy High show and takes pictures and records the shows and posts them for the band on the YouTube channel he created. The Students have a fan page on Facebook, where they have some of their songs available to listen to.