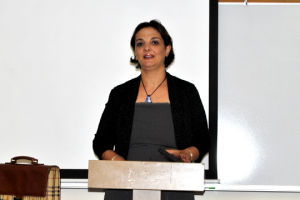 The struggle of immigrants in the United States has been a prominent political topic in the past months.  The Diversity Initiative Coordinating Committee intended to address this issue among others with students, staff and faculty with its diversity matters film series.

The first film in the series was “Amreeka,” a film about an immigrant in America who came from the West Bank with her teenage son.  The film followed the struggle of Middle Eastern immigrants trying to adapt to culture in the United States, and some of the prejudices that came about immediately following the attack on Sept. 11.

“When I was watching this film I found it extremely realistic,” said Bassima Schbley, assistant professor of social work at Washburn University.

Schbley said most people in the United States do not know what it feels like to have to leave home for better opportunities, and for a better chance of getting a good job.

She also said it is important for people to know that people in the Middle East are not only Muslim, but also Christian and Jewish.

“She feels like she is a burden,” said Schbley, speaking of the woman in the film.

A lot of immigrants are homesick, but when they return home, feel like they don’t really belong anymore Schbley said.

“Even though I’m not from this [the woman’s in the movie] culture, there are still things you can relate to, being a woman, your pride in your country, wanting to make a better life for your children, better life for yourself, those things are kind of universal to me,” said Dona Walker, director of Multicultural Affairs at Washburn.

Schbley said that in some parts of the world, those who come from Palestine are not even seen as second-class citizens.

Schbley explained that she understood very little English, and was “scared to death” when she first came to the United States. She mentioned her fear of the food, that “everything would be polluted with pork.”

Another issue that some immigrants to the United States face is not understanding the exchange rate between the currency of their home country and the U.S. dollar. Schbley gave the example that when she first came to the United States she would occasionally buy yogurt and bread, and give the cashier $50 and tell them to keep the change.

“I don’t think we talk about it, we just go through life and this is how it is, but I think it’s still important, it’s important to me.” said Walker.

Schbley said making an effort to learn about one another should be a priority.

“We decided that diversity is what really unifies us,” said Schbley.