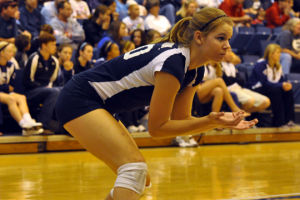 “I think every kid on our team contributed to our success,” said Chris Herron, Lady Blues head coach.  “I can’t think of one kid that didn’t have a pretty good weekend.  Generally, when that many kids contribute, you have success.”

Even though the Lady Blues have only lost one match this season, Herron is aware of flaws in their game and is working to correct them. He has to make sure the team continues to improve after each match, regardless of how the team played previous.

“When you win, there’s always things you need to work on, and when you lose, there’s a lot of things you did well,” said Herron.  “In this case, in game one of this last match, we didn’t block very well.  Overall, I think that’s the biggest issue we have is we need to block just a little bit better.”

The Lady Blues have two more conference games at home against Southwest Baptist University on Friday night and Pittsburg State University on Saturday afternoon. Herron is not immediately worried about preparation for the home games this weekend, his team was focused on the game Tuesday night first and will begin watching film for Southwest Baptist today.

“Well, we’re not doing anything right now,” said Herron.  “I mean, we don’t ever worry about it.  It’s the old cliché, ‘We only play what’s in front of us. We’ll cross that bridge when we come to it.”

The team has been very successful since the beginning of the season. However, the team’s confidence was built up in the huge win over nationally ranked University of Central Missouri and the team has carried that confidence since. Renshaw, freshman outside hitter, reflected on the season as a whole.

“Coming off the win from beating UCM helped us a lot,” said Renshaw.  “I think it built us as a team and it really showed how good we can be.  Coming off from the loss and beating Central helped tons, too.  It just built up our team chemistry and play, on and off the court.”

Renshaw is also aware that there is always room for improvement in any player’s game. Although each player contributed over the weekend, every player has something specific they will work on in practice to improve on individually and contribute that success to the success of the team.

The next three matches do not phase Renshaw, as she has the same mentality as Herron. She focuses on one match at a time.

“Our conference is whack right now,” said Renshaw.  “We just have to take one at a time and get through the first one and then focus on the next match.”