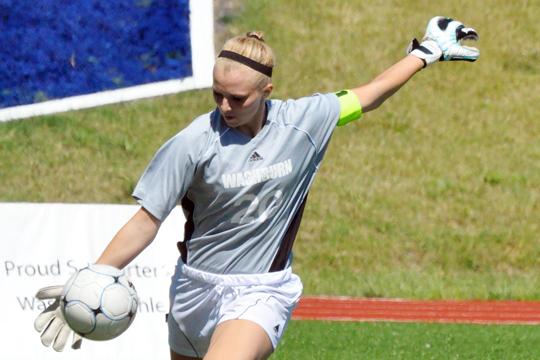 Heads up! Washburn goalkeeper, Ashley Klone, kicks a ball during the Lady Blues game on Saturday. Washburn tied 1-1 against the University of Incarnate Word. Photo by Erik Boeselager.

A native of Casper, Wyo., Ashley Klone, senior goalkeeper, has made quite the impression on the Lady Blues Soccer team. Now in her fourth year at Washburn University, Klone is ranked second all-time in wins in goal with 25, 13 shutouts, 169 saves and has played over 4,000 minutes, the second most of any goal keeper in Washburn history.

“I’ve been playing soccer since I was about 6,” said Klone. “The first team I ever played on was a Boys and Girls Club team in Casper, WY. I just played soccer throughout the years, and as I got older, I played on a club team, which travels around and is more competitive.

“We traveled all around the Rocky Mountain region, and then played high school soccer. Then I met [Head Coach] Tim Collins and came to Topeka.”

Despite all of her success playing the game, it was something completely foreign and new to Klone’s family.

“My sister has never played soccer,” said Klone. “And my parents both said that when they were kids, they didn’t have soccer. So when I started playing soccer and got pretty into it, they had to learn the rules of the game.”

After visiting many schools, Klone chose Washburn because of the atmosphere, small class sizes, friendly people, and because she liked the campus

Throughout her time as a Lady Blues’ goalie, Klone has enjoyed traveling and the surprise victory of the underdog. “It was fun my sophomore year we went to Hawaii and played two games,” said Klone. “That’s a trip I’ll never forget.”

“I’d put Jordan Shefte on lead vocals because she loves to sing and she’s crazy and it’s very entertaining,” said Klone. “She’s a really good rapper. A lot of people don’t know that. I’d put Danielle Sicard on drums because she’s crazy and intense in whatever she does.

“I’d put Tia Stovall on guitar because she’s taking guitar class and so she’d actually know what she’s doing. Everyone else on our team could be dancers because everyone on our team loves to dance. I’d be the manager because I’m pretty boring and shy.”

Klone’s efforts have not gone unnoticed by others around her who cannot praise her enough.

“She does a fantastic job just leadership by example,” said Tim Collins, head soccer coach. “She’s one of the hardest workers in the program. She always shows up. She always gives her best, day in, day out. Always is one of our themes. She’s the epitome of that.”

Klone also puts in time breaking a mental sweat. Even with Klone’s success as a goalie, the biology major recently applied to medical school and hopes to rise in the field as high as the neck of Apatosaurus, her favorite dinosaur.

“I think the other thing that she brings is that she’s a biology major,” said Collins. “That’s a tough major here at Washburn and she’s fantastic in the classroom. She’s one of the Capital Federal scholar athletes, and she has a terrific grade-point average. And her dedication to being here for the right reasons, being here as a student and being here as an athlete sets a pretty high bar.”