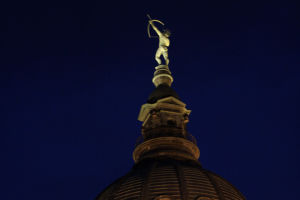 When I moved to Topeka my freshman year, I went immediately into culture shock. There was nothing to do. No place (clean and appropriate) to find late night entertainment for college students.

Now, two years after my initial introduction, I can shpiel off the different things I can’t stand about Topeka: the crime rate, the lack of late entertainment, the creepers that hang around campus, the rainbow-bearing haters, the complete lack of student involvement in activities, the disparity twixt the suburbs and where I live in Central Park…the list goes on.

Just as I was ready to shake the dust of Topeka from my sandals, the Google experiment took hold of Topeka, and some of the efforts to make Topeka a cultural hub became more visible. I resisted at first because I am one of only a handful of Topekans I know who have not had their cars broken into. After time, projects like the Jayhawk Theatre sucked me in to a zone of caring, where I feel the sudden urge to get involved and spontaneously pick up litter.

My Topeka pride(ish) has reached the point that the other day, I stumbled on to a website where people were posting nasty comments. Comments that I once would have posted myself. OK, or comments that I actually did post. And I realized that the biggest problems I had with Topeka came from the fact that, as a college student, I didn’t have a vested interest in this town’s future.

I hadn’t bothered to get involved, and neither did my peers, who go clubbing in Lawrence. Few choose to support the businesses that stay open late, or lobby to reform the ones that don’t.

I’m not quite sure why we are so complacent in our unwillingness to show even a little interest in the community we live in. I’m also unsure why we spend so much time complaining and so little time getting involved in our community. I believe that if every student puts in just a little effort to make this place better then maybe, just maybe, we could feel safe going off campus. Maybe we will have more to do than just sit at home and wonder how far away the gunshot was that we heard just a second ago… Some of the complaints are valid, however all that people seem to do is complain.

Perhaps, instead of being the most crime-ridden city, Topeka is just plagued with a lot of whiners. Instead of seeing those avenues of entertainment as opportunities to get out there and socialize, they simply stay in and gripe that Topeka doesn’t have anything to do. Perhaps the problem isn’t the city itself, but the person who lives in the city.

If you don’t believe me, take a look at the A&E tab. Read through it and I bet you’ll find a part of Topeka you’ve never seen before.