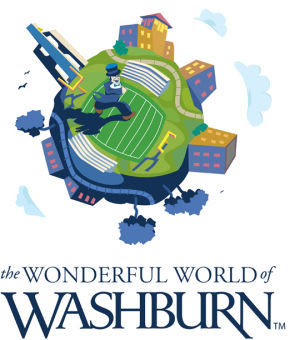 On a brisk Tuesday night, Washburn student organizations headed to the campus to find some clues.

In the annual Ichabod Race Tuesday night, 18 organizations began with one puzzle piece and one clue and hoped to return first with many more pieces in hand to eventually compile a top hat.

The pieces were given after the team arrived at the area indicated on their clue. Clues included hints similar to “these wonderful colored Washburn statues that never sit” indicating the artwork in between the Stoffer Commons portion of the Memorial Union and the Garvey Fine Arts Center. Each group went to the same location in the same order.

The event, one of many Washburn University Homecoming Week 2010 activities, began promptly at 7 p.m. as students had to return and piece together their puzzles by 8.

It took only but a half an hour for the first teams to begin returning. Fraternities Sigma Phi Epsilon and Phi Delta Theta returned at nearly the identical time and tied for first place in the event.

Briton Alexander, a senior Phi Delta Theta who competed in the Ichabod Race, was happy to see his team’s victory, even though there were some complications along the way.

“We got confused on some (of the clues) but we toughed it out and kept on running,” said Alexander.

Even after returning, Phi Delta Theta had actually been given two of the same puzzle piece, so their puzzle, while designed like a top hat, had them confused momentarily while they solved that problem. But they still tied for the victory, even after the confusion.

Runner-ups were from sorority Zeta Tau Alpha. Kaleigh Poole, a sophomore Zeta Tau Alpha, was glad to see her team come so close. She said it would hopefully set a precedent after her sorority won Yell Like Hell last year.

Jane Billinger, a junior Zeta Tau Alpha, competed in the Ichabod Race last year and while she was able to provide some clues, according to Poole, one of them threw the team off.

“It kind of did and it kind of didn’t (help with Billinger’s experience) because there’s a fountain clue every year and Jane immediately told us to go to the Garvey (Fine Arts Center) fountain and it ended up being all the way at the 17th and Washburn fountain,” said Poole.

And as far as preparing for the rest of the week, Zeta Tau Alpha’s also well on its way.

“We’ve rocked it out. Yell Like Hell with Sig Ep’s going great and all of our other stuff’s being awesome, so we’re pretty confident for the week,” said Billinger.

Following all of the participating homecoming events, a winner from both the Washburn Greek community and another organization will be presented a trophy at an undetermined basketball game. The winner will be determined by who did best overall at the homecoming events.