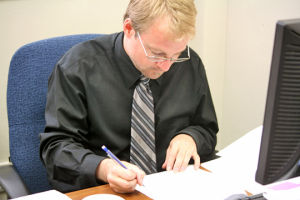 Professor Corey Zwikstra came to Washburn University in the beginning of August, after teaching at Temple University in Philadelphia. Originally from Canada, his family remains in Alberta.

Zwikstra said the people in Topeka are much more friendly than in Philadelphia, and he prefers the smaller class sizes of Washburn, especially because English classes rely more on discussion, which is hard to get in classes with over 100 students. He says he feels very comfortable in Topeka and at Washburn.

“I love how friendly the people are,” said Zwikstra. “I prefer smaller class sizes, because of the nature of the class, a lot of education in English comes up through discussion.”

Zwikstra plans on staying at Washburn University for a while, since he has no reason to look elsewhere.

The only disadvantage to Topeka is that he does not drive, so he has to rely on public transportation where he said he felt some of the people can be questionable at times.

“Its just me, myself, and I,” said Zwikstra, referring to coming to Topeka by himself. He does not have any family in Topeka or even any pets.

He hasn’t experienced the summers in Topeka, but feels the winters will be milder than he is used to.

“I’m better with cold than with heat,” said Zwikstra.

One important factor about Washburn that Zwikstra pointed out was that the University is student centered. He said Washburn focuses more on education than on faculty research. Some of the other major universities where he taught were all about research from the professors and didn’t pay attention to really teaching the students. He said some universities saying students come first is just lip service, whereas at Washburn, he believes the faculty actually mean it.

One of the main issues he has had to deal with in settling at Washburn and in Topeka is dealing with Visa issues.

Zwikstra hasn’t gone out much into Topeka, but is interested in the culture, though he admits that Philadelphia probably has more cultural activities since it is a much larger city.

He has also pointed out that he hasn’t needed something that he hasn’t been able to find, and that the faculty at Washburn has really helped him with the transition.