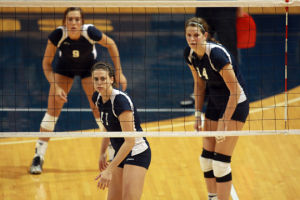 However, it was not all bad for the Lady Blues. Senior libero/defensive specialist Molly Smith moved into 10th place on the MIAA’s career digs list. She currently has the third most career digs in Washburn history, needing only 33 digs to move into second place on the list.

On Wednesday, the first volleyball regional rankings were released, with Washburn ranked third in the South Central Region following fellow MIAA schools Central Missouri and Truman State, respectively. Washburn will have a chance to take on the latter Friday night at 7 p.m. in Lee Arena in the Think Pink game, in which fans are encouraged to wear pink to support breast cancer awareness.

On Saturday, the Blues will then face Missouri Western at 6 p.m. in Lee Arena before traveling to Omaha, Neb., on Oct. 26 for a reunion with the Mavericks.