Ichabods snap streak in thriller over Gorillas in double overtime 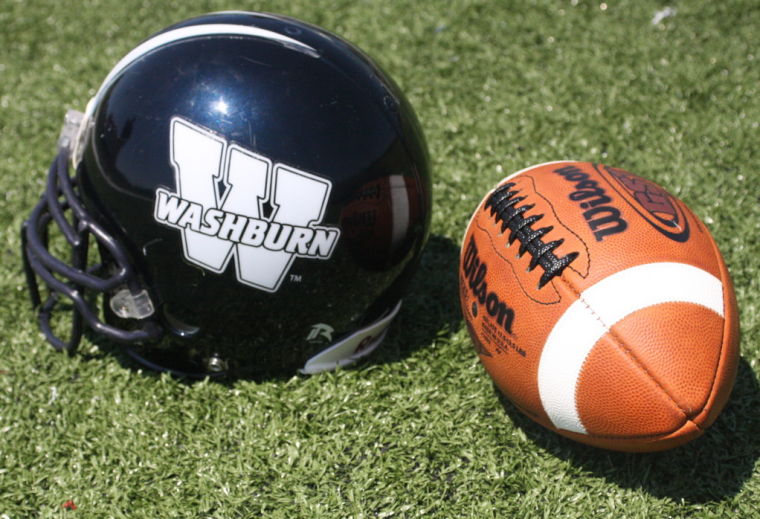 The Washburn Ichabod football team jumped out early and held on late as they won their third straight game in a 35-34 double overtime win in Carnie Smith Stadium. The win snapped a 17-game losing streak to the Gorillas in Pittsburg. The Ichabods will be back in action next weeked for Washburn’s Homecoming on Saturday hosting Northwest Missouri.

Washburn’s Joe Hastings 16-yard touchdown reception in the second overtime from Dane Simoneau tied the score at 34-34. The Gorillas had the first possession of the second overtime and scored on Terreance Isaac’s third touchdown of the day, but PSU’s extra point was pulled to the left. Steve Ivanisevic’s extra point was final nail locking up the 35-34 win for the Ichabods (4-3, 3-2 MIAA).
Neither team scored in the first overtime period. The Ichabods drove to the Gorilla  2-yard line, but Simoneau’s pass was intercepted off a deflection by Nate Dreiling. PSU had a chance to win the game in the first overtime period, but Jake Craig missed from 37-yards out.
The Ichabods racked up 28 first half points scoring 14 in the first 5:19 of the game. Justin Cooper took the second snap of the game and dashed 70-yard on the first possession of the game. After the Ichabods forced a punt on the Gorilas’ first possession with the ball, Dane Simoneau capped a 7-play 50-yard drive hitting Tore Hurst on a crossing route for 22 yards staking Washburn to a 14-0 lead.
In the second quarter, the Gorillas (3-4, 1-4 MIAA) were forced into punt formation and PSU’s Jared Witter was tackled after the snap by Brody Schuler and fumbled. Schuler scooped up the ball and returned it six yards for an Ichabod touchdown with 6:16 remaining to play in the half.
The Gorillas scored on the ensuing possession as Terrance Isaac rushed 19 yards wrapping up an 8-play, 81-yard drive cutting the Ichabod lead to 21-7.
Washburn’s DeJuan Beard scored the final points of the half on a 14-yard reception from Simoneau on the Ichabods’ next drive putting Washburn up 28-7 right before the half.
The second half saw the Gorillas roll off 21 straight points to tied the score with 5:36 remaining on Terrance Isaac’s second toucdown of regulation on a 32-yard run taking advantage of an Ichabod fumble by Simoneau.
The Gorillas had a chance to win the game at the end of regulation, but Craig’s kick sailed to the left setting up the overtime period.
Cooper led the Ichabods with 123 yards and one touchdown while Simoneau finished 14 of 31 for 203 yards and three touchdowns. Hastings had four catches for 59 yards and the overtime touchdown.
Defensively Michael Wilhoite and Jared Brawner head had 11 total tackles. Wilhoite had 1.5 tackles for loss and Brawner recorded a tackle for loss. Jahmil Taylor had 10 tackles and Zach Falldorf recorded eight.
Isaac led the Gorillas on the ground with 141 yards on 13 carries and Zac Dickey had 110 yards on the ground as the Gorillas tallied 346 rushing yards on 53 carries.
The Ichabods recorded 382 yards of total offense while the Gorillas had 431 with 85 of the yardage coming through the air. Washburn limited the Gorillas to 114 total yards in the first half.
Delete Image
Align Left
Align Center
Align Right
Align Left
Align Center
Delete Heading