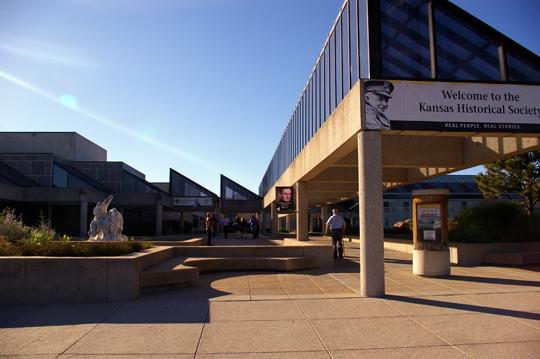 The Kansas Museum of History has a rich and fulfilling history that features a living historiography which involves ordinary people from ordinary times.  The museum contains 30,000 square feet of exhibits that range from 5,000 years ago to present day. The museum has interactive features as well, like touching a patch of buffalo fur, fun quizzes and videos.

The museum is currently hosting a special exhibit, “Cars: The Need For Speed” until Nov. 28. For four Fridays this past summer, the museum hosted the “Sundown Festival,” which featured a movie per night related to the car theme. Two of the movies shown were “Cars” and “American Graffiti.”

Inside, the history of cars and how they came to be as they evolved through the years is on display. There is also a display on the first NASCAR race in 1949, won by Kansan Jim Roper.

To kick off Kansas’ 150 years of statehood in 2011, the next special exhibit called “150 Things I Like About Kansas.”  It starts on Kansas’ birthday, Jan. 29. The exhibit will contain related objects, quotes, stories and interactive elements. There is also a Kansas Day event that day for student groups with themes based on Kansas history, and have had up to 2,000 students in attendance in the past.

The regular exhibits are in chronological order, starting with the museum’s oldest clay artifact of a human effigy to modern day items as recent as the late 1990s. One of the most popular exhibits in the gallery is the train, that visitors can walk inside. Many visitors come from all over the country come right off of Interstate 70 to visit every year.

The museum tells stories of people behind the history in a way that people can relate to.

“History isn’t something that just happens in the distant past. History is yesterday, too,” said Martin.

Kansas fills an important role in history with familiar landmarks like the Santa Fe and Oregon Trails, as well as historic figures like Wild Bill Hickok and Gen. George Custer.

The museum also offers podcasts, which change every two weeks. Last year alone, there were 80,000 downloads. It is available on iTunes, under “Cool Things in the Collection.”

Also on the website is a feature called active collecting, which lets people know what the museum is looking for in future exhibits.

For example, there were people in Waverly, Kan. that had sports items available for a special sports exhibit that was featured about four or five years ago. If anyone had questions on donating family heirlooms, the active collecting page has more information. Everything statewide is featured.

For children, there is Discovery Place, where they can dress up in frontier clothing, play games, and have fun learning about Kansas history. Discovery Place is open from 1 to 4:30 p.m., and interested parties can book it for playgroups and birthday parties.

The gift shop has unique gift items available for purchase, and is open during museum hours. Tack pins for Kansas’ 150th anniversary are now available for early gift giving. Books, T-shirts, magnets and key chains are other featured items.

The museum is surrounded by four trails, equaling 2.5 miles. Along the trail are prairies, woods, a one-room schoolhouse, two bridges, and two creeks. There are also picnic tables and a gazebo for family picnics. The wooden “Indiana Jones”-style bridge was an Eagle Scout project built by local area Boy Scouts.