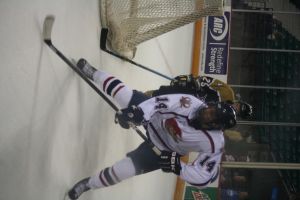 It certainly wasn’t the weekend the Topeka RoadRunners were expecting.

A night after losing 3-2 in overtime to the Texas Tornado, the RoadRunners (5-2-1) returned with the possibility for vengeance. Instead, they fell Saturday to Texas 2-0 at Landon Arena. Topeka only lost two straight games at home once all of last season.

Texas jumped to a 1-0 lead at 7:57 of the first period when Josh Royston buried the rebound off a J.D. Howard shot. While Topeka led in shots after the first period, Texas (4-2-3) responded with a 13-4 shot advantage during the second period. Topeka goalie Rasmus Tirronen kept multiple chances away from the back of the net that looked destined to be sure goals.

But in the third period, as the RoadRunners scrambled for the tying goal, Jack Prince ended up in a breakaway against Tirronen. With only 1:39 left in the game, Prince first a hard wrist shot into the back of the net to ruin any chances of a tie. Topeka hit four posts in the game.

The RoadRunners have only scored 22 goals in eight games on the season. Michael Hill, a returning player, leads the team in goals with five, but currently, nine of the team’s 17 remaining goals scored are from new players.

“I don’t think our veterans are carrying us at this point,” said Langer. “We’re not getting a whole lot of production; whereas last year and the year before, we had our veterans carry us a bit early and let the young guys catch up. We’re not seeing that right now.”

But for a team that went 4-0 through the North American Hockey League showcase, Topeka has now dropped three of four games, one being in overtime. Part of the problem may be not having permanent ice at the Kansas Expocentre.

“I’ll say it is a lack of practice time and jumbled schedule,” said Langer. “We were riding some confidence (in the showcase) and playing well, now we just have to get that confidence back.”

Topeka will look to bounce back this weekend when they play the Wichita Falls Wildcats (7-0-1), who are tied for first in the NAHL South Division.

“We’re still a good hockey team with a lot of good players,” said Langer. “We just have to bounce back and move ahead.”