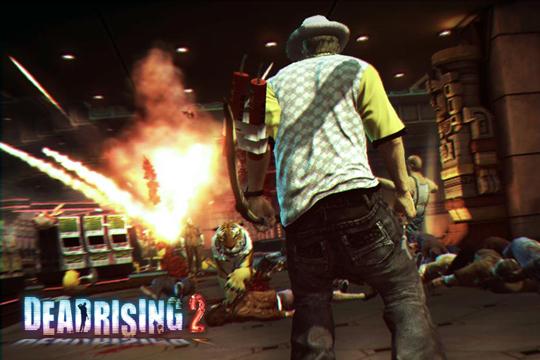 More brains Capcom’s Dead Rising 2 is a sure bet for zombie-killing fun. It keeps the best elements of its predecessor, while also providing a fresh gaming experience. The game is available for PS3, Xbox 360 and PCs.

If you’re looking for a good game to get you in the Halloween spirit, Dead Rising 2 may be just the game for you. Although the game relies more on gore than ghouls, massive hordes of zombies and a myriad of customizable weapons make Dead Rising 2 a sure bet for classic zombie killing fun.

This rendition of Dead Rising follows motocross star Chuck Greene and his young daughter. Chuck lost his wife in an incident where his daughter was infected, and she now requires frequent doses of the cleverly named drug Zombrex to prevent her from becoming a zombie. Luck seems to be against the well intentioned protagonist, who always seems to be in the wrong place at the wrong time.

Similar to its predecessor, Dead Rising 2 pits you against a virtually limitless amount of undead and a few less-than-friendly living. The undead in the game prove to be of little challenge to Chuck, who is a MacGyver in this zombie apocalypse nightmare. From the classic boomstick (pitchfork and shotgun) to the snowball cannon (fire extinguisher and water gun) there is definitely room for flexing your creativity in weapon customization.

Unlike other zombie horror games, Dead Rising 2 trades creepy aesthetics with a gratuitous zombie killing frenzy, with less-than stunning visuals. Those who enjoyed Frank West’s photojournalism in the first Dead Rising will be disappointed, as it is completely removed from this game. However, because Dead Rising establishes itself, and Chuck, as a unique re-envisioning of the first game, Frank West’s attributes don’t feel missed.

The addition of online multiplayer adds a new level of fun. Competitive multiplayer is an American Gladiator-esque set of mini-games for up to four players. From using giant moose antlers to scoop up and otherwise destroy zombies to squashing them in giant metal hamster balls, this multiplayer option uses the same hilariously dark, grotesque humor found throughout the game.

Online co-op allows for another player to join the host’s single player story. Although both players play as Chuck, the comical, wacky costumes give each player a unique feel. While the guest can’t save their story progress earned in co-op play, they can take the cash and experience earned with them.

All in all, Dead Rising 2 takes all the best elements of the first game and adds enough to make the gaming experience feel fresh and revived. The mediocre graphics and frame-rate issues aren’t enough to keep Dead Rising 2 from being a great, tremendously fun, blood-drenched adventure.