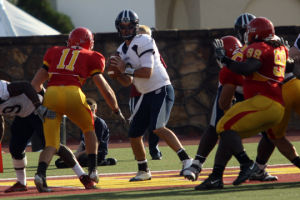 This week, the Ichabods’ Homecoming matchup is against the defending national champions, the Northwest Missouri Bearcats, a team that hasn’t lost an MIAA game since 2005.

“Obviously, it adds some excitement to the game,” said Craig Schurig, head coach. “You always want to play well in front of people that are coming back to the university, and some of them haven’t been back in quite some time. You want to show your program off and the players. They know it’s a little added feature to the game, particularly the pregame stuff that builds up to it, so there’s a little added excitement to it.”

Against Pittsburg State last Saturday, Washburn led 28-7 at halftime before giving up 21 unanswered points in the second half to tie the game at 28.

In the first overtime, Washburn had a chance to score, but had a Dane Simoneau pass deflected and intercepted at the PSU 2-yard line. The Gorillas then had a chance to win the game, but Jake Craig, Pittsburg’s freshman kicker, missed a 37-yard field goal. At the end of regulation, Craig missed another potential game-winner. This would be the theme for the day.

In the second overtime, the Gorillas marched down the field and scored on Terreance Isaac’s third touchdown of the day, but Craig missed the point after attempt and left the score at 34-28. Simoneau then tied the score on the next possession with a 16-yard pass to Joe Hastings, sixth-year senior receiver, and Steve Ivanisevic, senior kicker, capitalized on the disparity in experience between himself and Craig by nailing the game-winning PAT kick.

While the Ichabods may have been lucky against the Gorillas, they’ll need a lot more than luck against the No. 5 Bearcats this weekend for Homecoming.

“The only thing with Northwest is obviously their personnel are very good,” said Schurig. “We basically prepare the same week in and week out no matter what you doubt each unit, because of the talent and the execution that Northwest has, you have to do some different things just to combat what they do.

Senior linebacker Michael Wilhoite, who amassed 11 tackles and teamed up with redshirt freshman safety Bryce Atagi for a sack against Pitt State, will be experiencing his sixth Homecoming game at Washburn after injuring his right tibia and sitting out his redshirt senior season last year.

“It means a lot,” said Wilhoite, “I really enjoy it because I tend to play better when more people are at the game and I really enjoy people coming out and cheering us on and rooting us on. It comforts you and gives you more confidence in yourself and as a team. You’ve got the school supporting you, you’ve got family supporting you, you’ve got alumni coming. The stadium gets a little louder and it gives you energy when you might be tired on fourth down or in the fourth quarter, they feed you the energy to make you want to keep going.”

While the team is looking forward to the game, the quality of the opponent certainly represents a challenge. After losing its first game of the season to Texas A&M-Kingsville, the Bearcats scored at least 42 points in each of their next five victories, including a 42-0 romp over then-No. 8 Missouri Western.

“I think of it like this: we’re playing Northwest,” said Luke Schuckman, senior linebacker. “We’re playing the defending national champs, coming to our house and we’ve got to rise to the occasion and knock them off the throne. To be the best, you’ve got to beat the best and right now they claim to be the best.”

Schurig said once the distractions of the week are over, the team will be ready to get down to business on the field against the Bearcats.

“Once the game starts, it’s a game,” said Schurig. “We obviously are playing a very good opponent, so that’ll feature itself. Homecoming is great, it’s something you look forward to and the players hear the buzz on campus when they’re in class and things that are going on all during the week, so I think they enjoy it.”

Wilhoite’s biggest concern, however, is about making the game enjoyable for the fans. He said that if they manage to get the crowd into the game, his play will take care of itself.

“I’ve always looked at it like ‘If they’re willing to come out and watch us play, let’s at least put on a great show for them,'” said Wilhoite. ” It really means a lot to me, I really enjoy the family days and the senior days and the homecomings, it brings more people out and I think it’s a lot more fun of an atmosphere. If you can have fun, the game is just a lot easier.”