‘The Art of Self Defense’ amazes 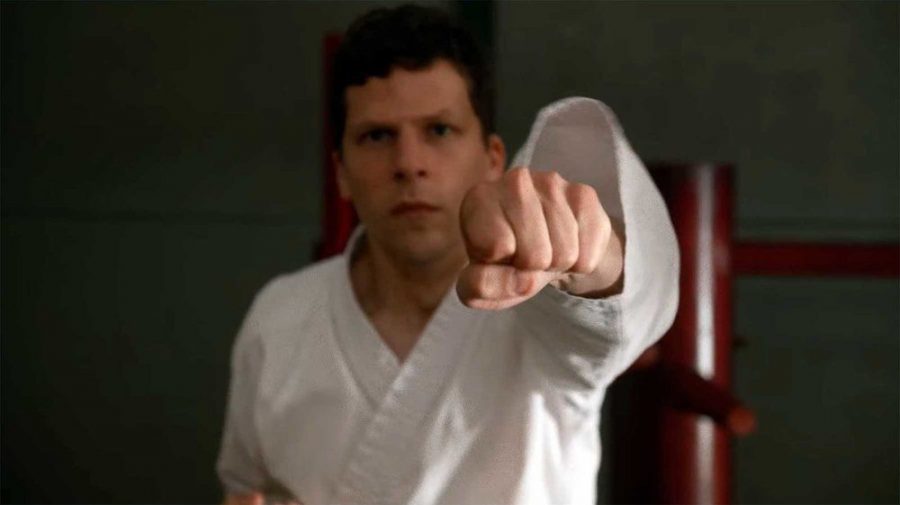 Bloodsport: 'The Art of Self-Defense' is a film that revels in its very dark brand of off-beat comedy, and is brutal in so many ways. Pictured is Jesse Eisenberg as Casey.

“The Art of Self Defense” is a movie I’ve been meaning to watch for a long time. It’s not playing in Topeka. So, I had to wait until it got a home video release, and here we are. This film is well worth the wait, because it is nothing short of excellent.

“The Art of Self Defense,” directed by Riley Stearns, starring Jesse Eisenberg, Imogen Poots, and Alessandro Nivola, is about 30-something Casey (Eisenberg) who has some problems. His job is awful. In a world where it is all too common to be talked down to as an effeminate male, he is said effeminate male. After getting beat up in the street, he decides to join a martial arts class to gain some sort of empowerment when he cannot find any other solace.

The first thing this film does so well is handle the tone. It is unique in its intentional dark comedy, and is consistent and done expertly. There are several humorous scenes that even out the sense of dread this film has going for it. Evidently this was intentional. The characters are also wonderful. The role of Casey was meant for Eisenberg. He will always be typecast as the reserved and awkward character. He is perfect in this role and is given excellent material to work with.

It is one of those movies with amusing dialogue, sort of like a Tarantino or Lynch films where dialogue is valued heavily. The intent is clear, and the awkwardness is brilliant. It revels in the mundane and excellently pulls it off. I also enjoyed how this film handled violence. It is brutal, unsettling and only used when it is most effective. It is nasty and ugly but a breath of fresh air. That is just one of the subjects it tackles so well. The only problem I have with this film is a couple plot points that were a bit too predictable for my taste, but it didn’t necessarily tarnish the story being told all that much.

Overall, I highly recommend “The Art of Self Defense,” but it is very hard to articulate exactly why. It is a brutal take on society’s toxic masculinity epidemic. It is something that really needs more attention in film. The only other recent thing I can think of tackling this is “Cobra Kai” and “The Joker.” It is brutally honest and isn’t afraid to show it. It has just enough bite as it does bark. It is so uncomfortable and soaks in that discomfort, waiting to gut-punch you with another turn in the story, almost holding me emotionally hostage for its runtime. Being Stearns’ second film, and his first film being just as well received, I am excited to see what is next for the director. While it doesn’t offer any true answers or solutions for the questions it raises throughout, it may just be my movie of the year so far. I hope everyone takes the time to watch it. I highly recommend you see it.