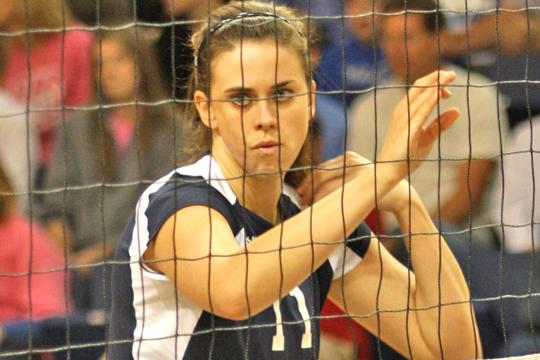 Killer queen Junior middle/rightside hitter Mollie Lacy helped lead the No. 6 Lady Blues to a 3-1 victory Saturday against No. 11 Truman State. Lacy is second on the team in kills with 203.

After coming off a tough loss in their previous game, in what some were terming an “upset” the Washburn Lady Blues volleyball team bounced back over the weekend with back-to-back wins.

Coming into the game against rival Truman State, Washburn was stung on the road by a Northwest Missouri State team that was just at a .500 record for the year. That loss set the stage for the weekend as the Lady Blues went to work leading up to the games.

“We have a great deal of respect for Truman State,” said Chris Herron, Washburn head volleyball coach. “It seems like since I’ve been at Washburn it’s been us or them as far as winning the conference.”

With an opponent of the caliber of Truman State, it was vital for Washburn to get out early and play well in front of a pinked-out Lee Arena. The Truman State game was the Lady Blues game supporting breast cancer awareness.

Washburn came out early in the first set led by Aubri Renshaw, freshman outside hitter and Hillary Hughes, sophomore outside hitter, each of which scored four kills to give the Lady Blues a first set win 25-17.

In the second set, Truman State took the momentum back as they led the set in total attacks at net 97-71. Washburn used their defensive prowess to fight off the aggressive play led by Molly Smith, senior libero and Hughes with 10 digs each. Breanna Lewis, junior right side hitter along with Mollie Lacy, junior middle hitter threw up a wall of defense as they blocked a combined five shots at net during the set.

Combined with the defense was an offensive effort that finished out the set with a five-point rally that allowed Washburn to create breathing room and eventually take the set 25-19.

After a brief intermission, Truman State came out and looked flat as Washburn scored the first five points of the third set. Truman State though held on and weathered the early jump ahead of the Lady Blues that combined with some sloppy play that included three consecutive attack errors that brought Truman State back into the set and swung momentum in their favor. Despite the late push in the set to come back, the Lady Blues fell in the third set to Truman State.

In the fourth and deciding set Washburn turned to Renshaw once again as the Lady Blues put on a dominant performance in the final set. Leading the set with 4 kills, Renshaw who finished out the game with 14 kills overall led the Lady Blues offense on a seven point rally early on in the set that broke the back of Truman State and all but sealed the victory for Washburn who won the set 25-20 and took the match 3-1.

Afterward the Lady Blues expressed their relief at getting a big win.

“It was a good bounce back for us after losing at Northwest,” said Renshaw. “Coming together as a team and playing as hard as we did coming off a loss, it was a great win for us.”

Renshaw’s play did not go unnoticed either.

Washburn then followed up the next day with a decisive 3-0 win over Missouri Western to finish out a successful weekend and position themselves second in the conference just one game behind Central Missouri in the MIAA conference standings as the season winds down.

Washburn then faced Nebraska-Omaha Tuesday night in Omaha, and swept the Mavericks 3-0 (25-22, 25-20, 25-22). Smith, this week’s MIAA Specialist of the Week, had a match-high 19 digs, and Hughes led the Blues with 10 kills. Junior setter Amanda Guess and redshirt freshman setter Abby Wittman both recorded double-doubles, with Guess accumulating 20 assists and 10 digs and Wittman accumulating 19 assists and 11 digs.