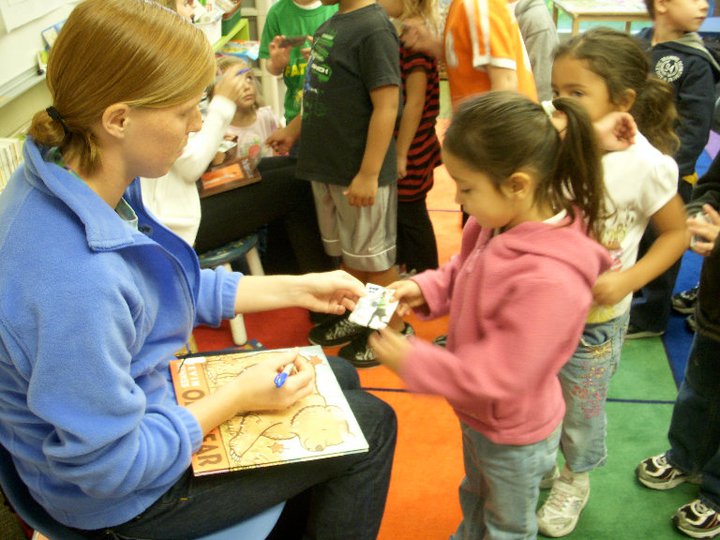 The Lady Blues soccer team recently spent time reading to students at Farley Elementary School. The trip was park of the Books with Bods program, which is sponosed by SACC. Photo by Jordan Shefte, Washburn Review

Recently, the Washburn Lady Blues soccer team put down their textbooks and picked up titles such as “The Berenstain Bears” and “Green Eggs and Ham.”

Farley Elementary School will host Washburn athletes once a month in a new program called, Books with the Bods, which is sponsored by the Student Athlete Advisory Committee (SAAC). The program features players from various Washburn sports reading to the four kindergarten classes at Farley Elementary School. Jordan Shefte, a senior mass media student and a defender on the Washburn soccer team, created the program originally as an assignment for class.

“We had to form a leadership program in my leadership class, and I have been thinking about doing something like this for a while so this was the perfect opportunity,” said Shefte.

Once she had an idea, Shefte worked at putting it into motion. She chose to contact Farley Elementary because it had been named after Washburn’s president, Jerry Farley, and his wife, Susan. Shefte started by sending a mass email to all the kindergarten teachers explaining the program. She got a response from Elizabeth Goering, a Washburn alumna who has been teaching kindergarten for three years.

“She was really excited about it because she had been a Washburn student too,” said Shefte.

Goering spoke to the other kindergarten teachers and they set up a time to meet with Shefte about the program.

This Tuesday was the start of Books with the Bods, and it will continue once a month for the rest of the school year. The soccer team was the first to participate in the program, and will be followed by the volleyball team in November and the football team in December. SACC plans to involve more teams next semester, such as men’s and women’s basketball, baseball and softball. The athletes go in groups of two or three to read to each class, reaching about 90 kindergarteners. The program benefits the kids, but Shefte hopes it will benefit Washburn athletics as well.

“Our hope is that it will increase attendance at the games. We will read to the kids and the kids will go home and tell their parents that they want to come see us play,” said Shefte.