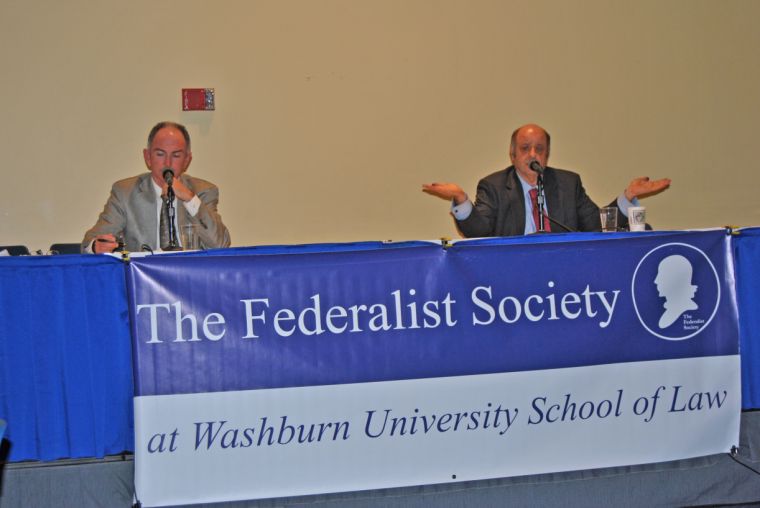 Blunt truth Eric A. Voth, left, and James B. Jacobs, right, debated last week on legalization of drugs. The two had very contrasting points of view on the situation.

Last Wednesday, Washburn shifted their focus to a timely topic.

The Washburn Law Federalist Society sponsored a debate with the topic, “High Time: Should We Legalize Drugs in America?” The debaters were New York University Law Professor James B. Jacobs and Topeka doctor and drug policy expert Eric A. Voth.

Jacobs serves as professor of Constitutional Law and the Courts and the director of the Center for Research in Crime and Justice. He was also appointed to the advisory board of the National Institute of Corrections by U.S. Attorney General Eric Holder.

The board is an agency that is part of the U.S. Department of Justice’s Federal Bureau of Prisons. Jacobs took the side of Pro-drug legalization during this debate.

Voth serves as the chairman for The International Drug Strategy Institute and has a medical practice in Topeka. Voth earned his medical degree at The University of Kansas Medical School. Voth wrote an article for “The World and I,” entitled “America’s Longest ‘War.'” He took the side of anti-drug legalization during this debate.

The debate began with the question, “What would the world look like if all drugs that are commonly criminalized now such as cocaine, heroin, and meth were to be made legal?”

Jacobs had the opportunity to begin on this question. While he admitted his view has changed over the years and that there is no simple answer he did have some suggestions.

“We are living through a period of mass incarceration which is very much on my mind, 2.2 million people in prisons and jails on any given day in the United States,” said Jacobs. “About one-fourth of that population is there because of the drug effects.

“Let’s say roughly half a million people incarcerated for taking drugs, possessing drugs and selling drugs, trafficking drugs and then going through the prison system being acculturated to that and going back on the streets, being assigned away to the criminal underclass.”

He said that it would be better if all drugs would be legal but “with hesitation.” His suggestion would be that if all those who had been in prison for drug use, possession, etc. would no longer be in jail there would be less “racial profiling,” “less police corruption,” and “take away the monopoly [of the drug market].”

Voth on the other hand believed that making drugs legal would lead to many problems such as more drug related accidents.

“Realize that drug use is not a victimless event and the whole issue around drugs really loses the fact that drugs create their own demand,” said Voth. “It’s not like wheat, it’s not soy beans, in other words if all of a sudden you have a mass supply of those things or prices go down, you have a flow of use or maybe a little increase of wheat sales, but with drugs one of the major things, that I see in treating over 4,000 addicts is that one of the major factors that holds them back is the cost of the drug.

Voth also said that demand with drugs falls into how much can be bought and how much is needed to pass out or overdose. This means that if anything is done about drugs and affects the demand, “the floodgates use will go up”

In the second half of the presentation, the question was “What about marijuana, alone, putting the other drugs aside, should it be legalized?”

Jacobs argued that though there are many negative affects to drugs ,the government should not have control over what a person should be able to do.

He then went on to discuss how many people have done drugs and still be successful.

Voth argued that drug use changes a person’s ability to make responsible decisions.

“Let’s talk about freedom from repression,” said Voth. “I would venture to comment that there is nothing as repressive as addiction.  The addict that quit smoking, that can’t give up heroine, that can’t walk away from his marijuana, that can’t quit drinking, and his life has been enslaved. He has been made a slave to a substance.”