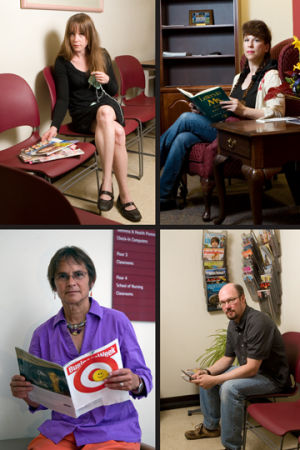 A group of artists working together to bring awareness through art will see their project in Topeka in spring of 2012.

The collaboration was designed to illustrate the plight of those who suffer from four specific conditions.

“The Waiting Room” installation is set to debut at the Catherine G. Murphy Gallery at the The College of St. Catherine in St. Paul, Minn. on Nov. 4. The project’s appearance in a seemingly random place could best be attributed to the efforts of Marguerite Perret, assistant professor of art at Washburn University.

“Maybe five years ago I had a show there about ecology called ‘Wonderland’,” said Perret. “At the time, I was also beginning to work on this idea about a show that would deal with women’s mental health issues.”

Though deciding to move forward with the “Wonderland” exhibit because it better fit with the other artist showing in their connected gallery at the time, the College of St. Catherine would not forget about Perret’s idea for a women’s mental health exhibition.

About two years ago, the college contacted Perret about the women’s mental health idea, then titled “The Yellow Wallpaper” after a short story by Charlotte Perkins Gilman.

“I hadn’t developed the idea any further,” said Perret. “Then I started talking to the people who I knew who also dealt with similar issues in their work, and it occurred to me that, instead of this being my perspectives about women’s mental health issues, it needed to be a collaborative exhibition with several artists and it needed to focus more broadly on women’s health issues.”

What started as an idea for an art installation focusing on women’s mental heath issues, has evolved into an elaborate statement about society, suffering and healing in reference to breast cancer, dementia, eating disorders and depression.

The broadness and expansion of the project has allowed more and more people to be involved, and many of them come from within the Washburn community such as Stephanie Lanter, Catron Visiting Professor at Washburn.

“Stephanie came on right away,” said Perret, “I asked Stephanie if she was willing to do this one little component of it.”

Lanter accepted a small part in the project but ended up becoming a principle collaborator along with Perret, Bruce Scherting, and Robin Lasser.

“Bruce Scherting is my husband and an artist that I work with a lot on projects,” said Perret. “Robin Lasser is a very feminist oriented artist who works out of Oakland, California.”

The number of people involved expanded from the initial collaborators to more artists. Washburn students and members of the Lawrence, Topeka and Salina communities along with  the community around the College of St. Cathrine in St. Paul became involved in the creative process.

As the display took shape some items and themes began to take form.

“The most dominant aspect is a chair,” said Lanter. “A sculptural chair that has been designed by us collectively.”

Though each member of the principle group has specific strengths, the design and creative ideas seem to come collectively. The chairs have a number of design elements to them that originated between the five central designers. The actual structures were created using both found objects and pieces as well as newly constructed pieces.

“Each one is upholstered with either a fabric with a design that Marguerite created,” said Lanter. “A lot of them have scientific imagery on them, or healing imagery, so that each chair, besides being really beautiful, has this dense layering of information.”

The chairs are very specific to the disorder they are representing. The breast cancer chair, for example, has a bra incorporated into its design as well has some implements of surgical equipment, and the dementia chair has a bathroom support stool dressed up as an ottoman.

“Our goal is both to draw people in to consider what is going on with the condition, but also learn about it at the same time.”

In addition to the chairs there will also be a crucial garment element to each display.

“Each tableau also has a garment,” said Lanter. “That is also somehow descriptive of the experience of having that condition or of being a caretaker for someone that has the condition.”

The garment making involves another Washburn professor, Sharon Sullivan, an assistant professor for the theatre department.

The other major component to the tableau is the floor. Each floor section will also have some sort of floor treatment or covering. The floors of both the dementia tableau and the eating disorder tableau have become a way for the community to contribute to the art piece.

“For the dementia tableau we asked people to make granny squares which is a traditional crochet pattern,” said Lanter. “Then we created these mats out of granny squares and also found clothing that we found at local thrift stores here and in Lawrence and Salina. There’s, sort of, real life history embedded and community contribution in the floor treatment.”

For the eating disorder flooring they asked various classes around Washburn and in the community to make beaded bracelets to make a pile on around the chair that resembles shag carpeting. The bracelets are a combination of white, red, and blue, though the idea behind them was not meant to be patriotic. In fact, the bracelets symbolize and attempt to counteract the pro-eating disorder culture.

“One of the symbols of someone who might subscribe to this sort of mentality is a beaded bracelet,” said Lanter. “Red ones are for anorexia and blue ones are for bulimia. We also are including white or clear bracelets as more a symbol of healing.”

Beyond the visual aspects, there is also an acoustic component to each tableau.

“You have the sculptural chair and then you have a chair that’s just a basic office waiting room chair,” said Perret. “It’s not embellished. It’s just grey and very bland, very typical of what you might see in some generic office space.”

The plain chair is accompanied by a set of headphones that play a composition specific to the condition. Made up of stories from sufferers and caretakers as well as music and emotive orchestrations, the tracks add yet another dimension to “The Waiting Room” installation.

After its stay at the College of St. Catherine, the installation will be moving to the Sabatini Gallery at the Topeka Public Library in 2012. Lanter and Perret plan to expand the exhibit to include four more topics and Topeka playwright Marcia Cebulska composed a work based on the exhibition concepts that will accompany the 2012 installation.

Along with the installation, Sarah Smarsh, assistant professor of English at Washburn, is helping to create and edit a book about the process of creating the installation as well as containing original creative works written specifically inspired by “The Waiting Room” concepts and components.

To learn more about “The Waiting Room” and keep up to date with the progress of the installation visit www.waitingroom.weebly.com or request to join their group on Facebook.