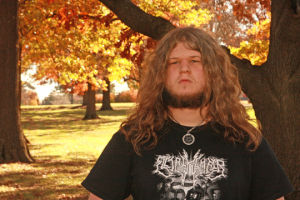 Kenneth Ecker, a freshman Washburn student, is a member of a band that’s going to be on Vans Warped Tour this upcoming summer. He’s also only 18.

Ecker moved to Topeka in 2007 because of his father, Arch Ecker, who is the play-by-play announcer for the Topeka RoadRunners, that were formerly located in Sante Fe, N.M. He ended up attending  high school at Washburn Rural and for a period of time, was a member of the band Atheotic.

While still a member, Ecker spoke with Bob Rodriguez, who was a classmate of Ecker’s, about getting his brother Andy to do recording for Atheotic. However, roughly two months later in the summer of 2009, after experiencing hardship and difference of opinion with Atheotic, he decided to try out for keyboardist for the already formed metal band Elctrikchair.

“We’d [Ecker and Elctrikchair] known each other for a couple of months and I asked to audition for keyboards at least, so I could go somewhere with music,” said Ecker. “Since I was already good friends with them, they let me audition and I passed it, surprisingly.”

But following his arrival in the band and playing keyboard for a period of time, bassist Charlie Long left the band to teach English in Korea. At this point, Ecker auditioned for bass guitar, which he admitted he’d never played prior to getting the spot, although he had played guitar for some time. He has now been playing bass since the beginning of 2010.

With the solidified line-up of drummer and clean vocalist Bob Rodriguez, 19, lead vocalist and lead guitarist Andy Rodriguez, 26, and Ecker, Elctrikchair has since gone on to release their 2009 album, Xenophobia, which is the fifth release by the band since their formation in Denver, Colo. in 2003.

Ecker explained that because the band only has three members, each member plays an extremely integral role, even Ecker’s bass guitar, which can at times go ignored in larger bands.

“Because we’re only a three-piece, I’m almost playing that rhythm guitar role on bass,” said Ecker.

Ecker had admiration for Andy Rodriguez, because of his ability to maintain vocal and guitar ability simultaneously.

“I’ve tried it [guitar and vocal simultaneously] and just being able to multi task like that is quite a skill,” said Ecker. “I envy him for that.”

As far as lyrical content, the band has one central theme in their newest album.

“It’s essentially looking at the idea of the end of the world,” said Ecker. “It’s about a plague, like the bubonic plague, beginning to attack people and at the end, everyone’s dead.”

He went on to say, the band essentially looked at all the hype about 2012 and thought it’d be an interesting concept idea for an album. Ecker was also able to shed light on the album title, even if the music itself isn’t their style.

“I want people to remember the term ‘xenophobia’, which means the fear of other cultures,” said Ecker. “Where we got that term was that with Bob Rodriguez being only 12 years-old and already having a CD out and playing with a band like the Misfits at a show, he’s showing up a lot of older drummers. So he’s gotten a lot of stuff from them. It’s different to those older people, so it’s xenophobic in a sense. And why we address it now is Bob Rodriguez is older and we can have that perspective on it now.”

After the members finish their spring semesters, they will embark on the 2011 Vans Warped Tour, where they will play every date. They will then play fewer shows and work on writing new music next fall.

Ecker shed light on just how the process to get on the Vans Warped Tour works.

“It’s a lot easier than it sounds,” said Ecker. “There’s contact info on the Vans Warped Tour website on who to call. We called them about April of last year and we found out it was already too late to get on this last one but they told us to call on Oct. 1, which we did. We were the first callers so we got right on. It’s like a first-come, first-serve basis for bands that have credibility.”

Ecker plans to continue pursuing his interest in film at Washburn and he and his bandmates agree to tour mainly in the summer. Even without consistent touring in the fall and spring, the band has played with The Black Dahlia Murder, Macabre, Three Inches of Blood, among others. They are signed to Blastzone Entertainment recording label and have CD’s available nationwide. Despite never being to Europe, Ecker also said the band has quite a following overseas. Using this as their backbone, his eventual goal for the band is to reach the status of one of the bands they’ve played with: The Misfits.

“Our big milestone is to make it among the same ranks as the Misfits,” said Ecker. “We’ll take any higher than that but we will be content if we are as big as them.”