Washburn’s Hills succeeds out of spotlight 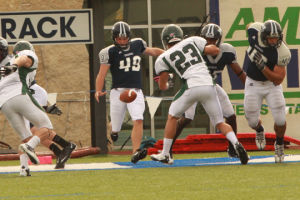 For redshirt senior punter Austin Hills, sometimes being the man behind the scenes is just as exciting as being the star athlete.

In his five years at Washburn, Hills has made quite an impact with his leg, kicking the ball a total of 5,356 yards, just over three miles. While he has never had the opportunity to individually score, he has set up a handful of safeties and touchdowns by positioning the ball near the goal line.

“Special teams are pretty vital in the game and that’s why coaches really take pride in the special teams. All coaches do,” said Hills, a native of Burlington, Kan. “We set up everything. Special teams set up field positions in punting and kicking and returning. Also with field goals, being able to score. Sometimes a lot of people overlook it just because from time to time it gets used but all the coaches are in the same boat with it being high up there in priority.”

While Hills certainly hasn’t been the most celebrated athlete at Washburn, he’s had his fair share of success. In 2008, Hills was named to the MIAA’s Academic Honor Roll and earned all-MIAA honorable mention after booting a career high of 64 punts at an average of 39.7 yards per attempt, including a school-record 87-yard punt against Nebraska-Omaha. He made the school’s Top 10 list for three statistical single season categories: punt attempts, punting yards and punting average. The following season, Hills averaged 38.8 yards per punt, which was the fourth best in the MIAA. His net punting average was even more impressive, as his 35.5 yards per punt led the MIAA and was the fourth best number in the nation.

“I attribute that to my coaches for being able to stick with me and give me a chance to show what I can do,” said Hills.

Hills said the punting profession is an odd one, indeed. While other players are looking to have the best stats, he said punters often would prefer to stay on the sidelines as much as possible.

“The punters never want to be out there a lot during the game, but we’re out there working for the defense,” said Hills. “I guess any time you’re out there on the field, it doesn’t matter how many times, your job is to just exchange field position. It’s nice to know that the coaches rely on me to do that if we are put into a tough situation.

“If we’re in fourth and short they may go with me instead of going for it because they know I can get good position for the defense and we can try again. It’s a real different position, I’d say, just because you don’t want to be the star athlete but you’re kind of the guy behind the curtains that helps things out in times of need.”

“I want to just finish out with a strong attitude and stay strong-legged, as well,” said Hills. “Just doing the best I can when I’m put in the situation to do it. Finish the season with a good average and good net and hopefully stay healthy, as well.”

Outside of football, Hills enjoys camping, hiking, snowboarding and playing basketball, as well as spending time with his family, though he is often teased by friends about the nickname he gives his father, Jim.

“I get made fun of a lot because I call my old man ‘dude’ all the time,” said Hills. “We just call each other dude. I don’t even call him ‘dad’ anymore.”

Hills said he wouldn’t be where he was today without a great deal of support from his faith, his family for the way they’ve raised him and the coaches for giving him an opportunity to play. He had one word to describe his senior season: inspirational.

“Just kind of looking back, you know senior year, your last year, you look back at the seasons you had and where you started and where you are now and being able to put it all together.”