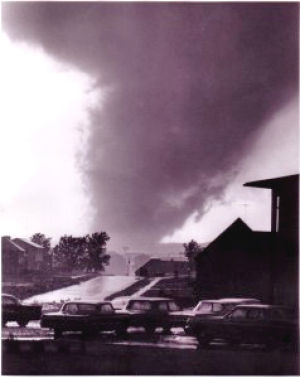 Some events that occur in a community’s history can have long lasting effects on its citizens. One author has written a book in an attempt to capture that moment.

On June 8, 1966, at 7:20 p.m., an EF-5 tornado struck the campus of Washburn University. Eleven of 13 major buildings on the campus were destroyed causing a total of $8 million worth of damage. Among the victims that evening, there were 16 fatalities. Forty years later to commemorate the anniversary of this tragic event, author Bonar Menninger wrote the book, “And Hell Followed With It: Life and Death in a Kansas Tornado.”

The book tells the story of the tornado that left many people wondering if the campus of Washburn could survive such a powerful tornado. The book also features indelible images taken that document the tornado’s destruction of Topeka as a whole and within the Washburn community.

After so many years some asked why Menninger felt the need to write a book about such a subject.

“I just felt like it was a story that needed to be told before everybody was dead that was in it,” said Menninger “I needed to do something on the side that would be fun.”

While writing the book Menninger reached out within the Topeka community to find survivors of the 1966 tornado. Menninger would record all of his interviews to refer back to them if need be. He recalls some of the emotional aspects of his interviews with the survivors. Menninger would start off getting a little background information from the survivor he was interviewing, once that was over and they began to discuss the tornado, things would get really emotional.

“When I’d start talking about the tornado, you could feel how emotional the people really are,” said Menninger.

According to Menninger, the interviews would get so emotional that he recalled two interviews he did with two women who survived the tornado in which one woman cried and the other started shaking just at the thought of the word tornado.

As a resident of Topeka during the time of the tornado, Menninger was only a young child when the tornado struck but says he was on vacation at the time. “We lived on 29th [Street] & Jewell [Avenue], we went on vacation the Sunday before so we missed all the excitement, that’s probably why I wrote that book.”