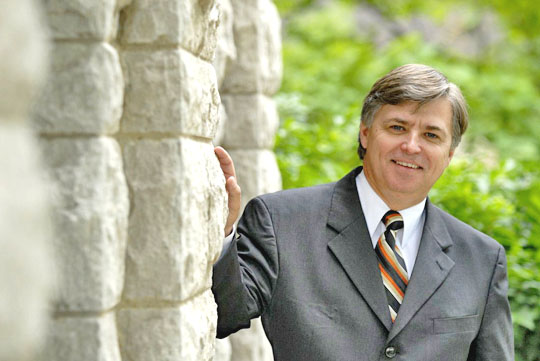 Russell Pembrook was recently selected as the new vice president of academic affairs. He officially begins the position Jan. 18.

Pembrook replaces VPAA Robin Bowen, who resigned last April. Nancy Tate has been the acting VPAA while the search process took place.  Mohammed El-Saidi, David Billeaux, and Michael Horvath also applied for the position prior to the selection of Pembrook.

“I am delighted Dr. Pembrook, who has a solid breadth and depth of experience, is joining Washburn in this extremely important position,” said President Farley. “Washburn is poised to make dramatic improvements as we begin implementing a challenging, but achievable, strategic plan. He has the qualifications to provide the leadership needed for us to succeed as we approach our 150th anniversary.”

Currently a special assistant to the president for accreditation and academic affairs at Baker University, Pembrook served for three years as Baker’s executive vice president and provost, the chief academic officer for Baker’s College of Arts and Sciences, School of Education, School of Nursing and School of Professional and Graduate Studies.

In addition, he is currently assisting the president of Baker as co-chairman of the Higher Learning Commission self-study process. Since joining Baker in 2007, he has held the title of professor of music/education and in 2009, he was also appointed interim vice president for enrollment management and financial aid.

Pembrook outlined plans for his ideal Washburn when he presented to the public Sept. 30. Pembrook supposed enrollment could be increased with a larger variety of sports to choose from. He talked of an instance where a bowling team and wrestling team had been implemented in a university, recruiting 60 students that otherwise would have gone to a different school.

Additionally, a subject Washburn has already been looking at was a subject on Pembrook’s agenda when he presented. Technology was emphasized to be a way students show employers thay are prepared for changes and advances in an area that is often changing.

He also emphasized paying faculty fairly and making sure that they are satisfied with the amount they’re given based on their efforts at the university.

“I think that you have to figure out a way to get money into the salary pool,” said Pembrook during his presentation. “You can’t expect, long-term, to retain your great faculty if the consistent message is: there are no wage raises.”

Prior to beginning at Baker, during 2001 to 2007, Pembrook was dean of the Conservatory of Music and Dance at the University of Missouri-Kansas City, where he also held the positions of associate dean of the conservatory, chairman of the music education/music therapy division, and Conservatory faculty chairman.

As he works towards his point of transitioning on Jan. 18 to Washburn, Pembrook emphasized just how enthusiastic he is to begin at the university and immediately make a difference.

“I am so excited to become a part of Washburn,” Pembrook said.  “The people and programs at the university are very impressive, and wonderful opportunities for further distinction exist throughout the institution.

“As I prepare to transition, I am grateful to Baker University for providing past leadership opportunities that will serve me in Topeka and look forward to meeting and working with all of Washburn’s faculty, staff, students, administrators and community partners.”