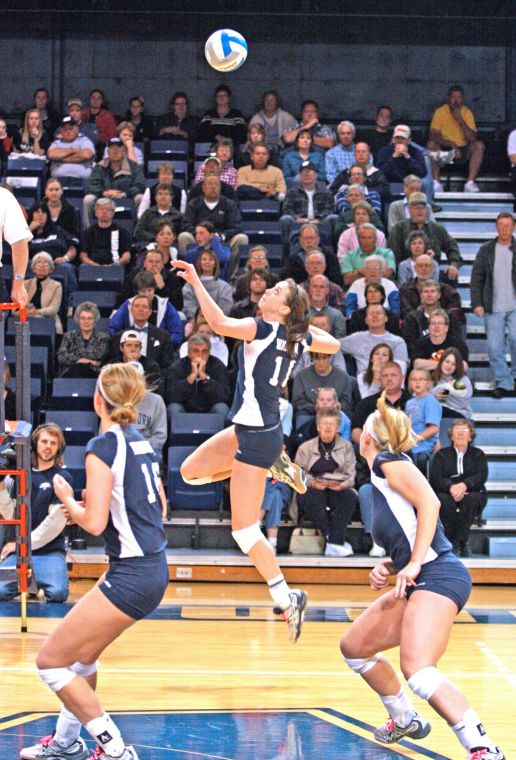 Mean streak The Washburn Lady Blues volleyball team stretches its winning streak to five games Tuesday night as they beat Missouri Southern 3-0. They have won 15 of their last 18 sets.

The Washburn University Lady Blues checked off another win this past Friday against the University of Central Missouri, defeating the Jennies 3-2. Though the Jennies won the first game, the Lady Blues quickly rebounded, winning the next two. UCM won the fourth game, forcing WU to win the tie-breaking fifth game.

The win came a match after the Lady Blues defeated the University of Nebraska-Omaha in Omaha. The Blues lost there the previous two seasons but were able to beat the Mavericks 3-0.

Going into the match against the Jennies, Herron knew it would be a fight, just like it always is.

“It’s nothing that we didn’t expect,” said Herron. “We knew that it was going to happen. Thank God that we came out on the good end.”

Herron was quick to praise the Washburn team’s great deal of intensity as the cause of their hard-fought victory and claimed a lack of intensity led to a rough first game.

“Well, I though Jessica Fey was terrific,” said Herron. “I thought our middles offensively were really good. I thought their middles were pretty good, offensively, also. I thought Hillary Hughes had a good overall game. Molly Smith dug probably another 30 balls, so I mean, she just keeps rolling.”

Junior middle and right-side hitter Mollie Lacy agreed that the team picked up steam that was lacking in the first game as the match went on.

“Everyone was hitting really well,” said Lacy. “Our defense really picked it up after the first games. That’s what we struggled with in the first.

“One area we really need to come out and practice hard is blocking in the middle. I really struggle with that tonight, and Central’s a good team. They always put up a good fight, and we came ready to play tonight and fought hard, so we’re really proud of that.

Lacy was unfazed by the close match and looks forward to the remainder of the season.

“We just have to stay focused,” said Lacy. “We can’t have any letdowns like we did against Northwest [Missouri State University] or any other teams, because anyone can get us at any time. We’re fighting to win a conference championship and do well in regionals.”

Senior defensive specialist Molly Smith was elated after the game.

The Blues returned to action Tuesday night in Lee Arena to face the Lions from Missouri Southern. Washburn started off strong, winning the first set 25-13.

The Blues jumped off to a 10-2 start, with freshman setter Abby Wittman setting up several Blues players for kills and getting one herself. Missouri Southern then scored three straight points, followed by six straight points by Washburn. Wittman had 11 assists in the set.

In the second set, Washburn continued its dominance by outscoring the Lions 25-21. The Blues led 22-21 in the waning moments of the set, but scored three straight points off of a kill by Hillary Hughes, an attack error against MSSU’s Haley Martin and a kill by Fey.

The Blues finished out the third set with another victory, this time 25-16.

Hughes led the Blues with 12 kills and nine digs. Junior setter Amanda Guess had a double-double with 20 assists and 12 digs, and Smith added 20 digs of her own. For the Lions, Ashlee Russell had 14 kills and Elin Skel led the way with 17 assists. Jenna Feldman had 13 digs.

Washburn will travel Nov. 5 to Bolivar, Mo., to face Southwest Baptist, then Nov. 6 to Pittsburg State. The final home game of the season is Nov. 9 against Fort Hays State, then the Blues head to Emporia for the final regular season game Nov. 12.