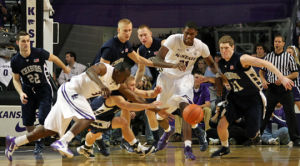 The Ichabod men’s basketball team is eager to build off their strong finish of last season, when they got all the way to the MIAA championship game.

The Ichabods finished the 2009-2010 campaign with a 16-14 overall record. They finished the season on a high-note with an appearance in the finals of the MIAA conference tournament as the No. 8 seed. That strong finish should serve as the catalyst to this season and a confidence that this team can play with the best.

“Everyone is excited to get the season started. We made a good run for the MIAA tournament championship and are hoping to build off of that finish,” said sophmore forward Bobby Chipman.

Their Cinderella run started against the MIAA’s top ranked team and No. 4 in the country, Central Missouri. After stunning the Mules in the opener, they went on to knock off Missouri Western in the semi-finals. With the clock striking 12, the Ichabods hopes of hanging a championship banner fell short at the hands of the University of Nebraska-Omaha.

“It happened to be a great experience for the team as a whole. We overcame adversity, stuck together as a unit, and really just learned how to win,” said Bob Chipman, men’s head basketball coach. What last year proved was that our team could beat the best teams in the country. Now, we need to be able to sustain that throughout the full season,”

The Ichabod basketball team tipped-off their exhibition season Tuesday at Allen Fieldhouse, home of the No. 7 ranked Kansas Jayhawks. The Ichabods fell behind early and could not make up the deficit in a 92-62 loss to the Jayhawks.

“Division II teams do not get the same chance that our kids get. We get to play top ranked teams in Division I basketball, Kansas State and Kansas obviously, but everyone wants to go play at UNLV. It really is a once and lifetime opportunity for our guys,” said Chipman.

The Ichabods’ trip to Manhattan happened to be a homecoming for Chipman. A graduate from Kansas State University in 1973, he played two seasons under coach Jack Hartman. The Ichabods lost to the Wildcats, 90-44.

“I naturally think about the time I had as a player there every time we play them. I love what Frank (Martin) is accomplishing; he’s an old-school guy and a winner. We will go in there and play our game and see where that puts us,” said Chipman.

With the heart of their lineup returning, expectations are high for this year’s team. Noteworthy players for the Ichabods are De’Andre Washington who received 2nd team all MIAA honors for the 2009-2010 season. Logan Stutz was a member of the MIAA all-tournament team and Nate Daniels is the Ichabods most experienced player and senior leader.

“We need to have great senior leadership this season, and I think we do. The other guys have to respect their seniors and buy into what they are saying,” said Chipman.

A new face for Washburn this year is red-shirt freshman Jeff Reid who was deemed Mr. Basketball in Kansas his senior season at Hayden High School. Reid transferred from St. Louis University in the spring and is expected to be a critical member to this year’s success.

“Jeff has the potential to be a great player here at Washburn,” said Chipman. “He’s a great scorer, sound defensively, and an all-around athlete. Jeff is going to be a real treat for our fans.”

Another returning starter is sophomore Bobby Chipman. As a freshman, Chipman made 16 starts and appeared in all 30 games for the Ichabods. Standing 6-8, Chipman serves as a hybrid forward with the ability to go inside as well as be an outside threat. Chipman scored his career-high against Nebraska-Omaha last season, all coming by 3-pointers.

“After going through my first year at Washburn and through a full season in the MIAA, I realized areas that I need to improve to become a better player,” said Chipman. ” Getting bigger and stronger was a goal of mine. I changed my approach to the way I trained in the weight-room; Different work-outs, new techniques, and a concentration on gaining weight.”

Chipman was not the only Ichabod hitting the weight-room during the off-season. With the help of Nick Stringer, the Ichabod basketball team had a professional approach to gaining strength and endurance. Stringer was an all-Big XII offensive lineman for Kansas State and was drafted by the Cincinnati Bengles. Stringer has brought in improved methods of stretching and weight training that will be a new attribute in the Ichabod’s arsenal for this season.

The Ichabods begin their regular season in Lee Arena on Nov. 16 against Peru State College. The Ichabods’ first conference game against the Nebraska-Omaha will be Dec. 1. An early chance to seek redemption from last year’s MIAA championship game.