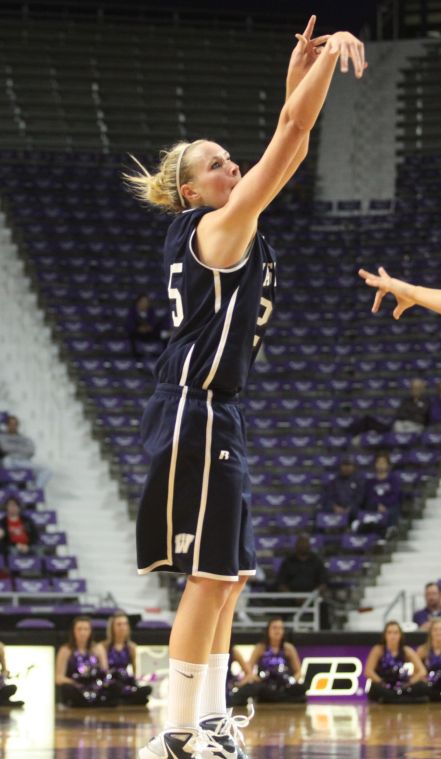 As another season of change fast approaches, one squad at Washburn is readying itself for the reality of fresh faces in key places.

The Lady Blues basketball team is coming off a successful year that featured a 27-4 record overall and 17-3 in conference en route to another conference title and an appearance in the NCAA postseason for the ninth straight season, which ended in the regional semifinals.

The Lady Blues are ranked No. 9 in the USA Today/ESPN Division II Preseason Coaches’ Poll and is picked No.1 in the MIAA preseason poll by the coaches and media.

Washburn now must regroup for this year as they replace all five of last year’s starters. They do return seven players with some experience and must work on blending them together with eight new players.

So far the Lady Blues have seen several different players contribute early in their exhibition season as they begin to work through developing the chemistry that is the hallmark of a team led by Ron McHenry, Washburn head coach.

McHenry is entering his 11th season as head coach of the Lady Blues. Winning 83 percent of his games since arriving at Washburn, McHenry has the most wins of any coach in Division II basketball over that period.

“It’s still early but I think we’ll be fine by the time the season starts,” said McHenry.

Stevi Schultz, junior guard (7.3 points, 0.9 assists-per-game) and Laura Kinderknecht, sophomore guard (4.3 points and 0.8 assists-per-game) return in the backcourt as the most experienced guards available and will be relied upon to give the team some veteran leadership.

Among the newcomers to the squad, Megan Lassley, freshman guard, a recent transfer from Seward Community College along with Lindy Arndt, freshman guard will be relied on to come off the bench and contribute to a team that is searching for an answer on depth. In addition to the two guards Sierra Moeller, a junior forward transfer from Boise State University will also come in to add depth to a team that will be a work in progress throughout the season.

“I think some of our new players have the potential to add a lot of dimensions to our team,” said McHenry.

The remaining upcoming preseason schedule will feature Southwestern, (Winfield, Kan.) a NAIA opponent and Drury, a Great Lakes Valley Conference team, both at home. After that the Lady Blues will take to the road and play at Phoenix, Ariz., in the Grand Canyon University Thanksgiving Invitational.

After their southwestern trip, Washburn will return back home and begin conference play against the University of Nebraska-Omaha Dec. 1 at Lee Arena.