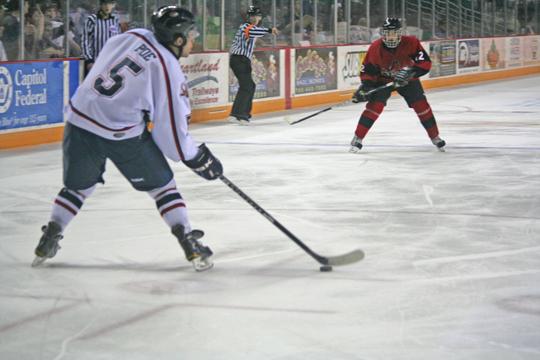 Jacob Poe, Topeka defenseman, had an assist in the RoadRunners 6-3 victory on Saturday night. The RoadRunners scored 10 goals in two games over the weekend.

The Topeka RoadRunners are beginning to find offensive depth.

After getting two goals from Michael Hill and Brian Christie in a 4-1 win over the New Mexico Mustangs on Friday night, the RoadRunners  continued their scoring ways again Saturday night.

Jordan Davis registered a goal, two assists, and a fight, giving him a Gordie Howe hat trick, as the Topeka RoadRunners defeated the New Mexico Mustangs 6-3 on Saturday at Landon Arena. Topeka had a different player score each goal Saturday night.

Roadrunners coach Scott Langer was happy to see this kind of production from a team who had relied much on the goal scoring of forward Hill early in the season. He was equally proud of the powerplay, which scored three goals on the night.

“Balanced scoring certainly helps,” said Langer. “I thought our powerplay was much better with just getting pucks to the net and getting some traffic in front.”

Scoring started early when Kyle Sharkey fired a backhand shot past Mustang goalie Bryan Jones at the 4:35 mark of the first period to give Topeka (11-5-2) an early 1-0 lead. Davis gave Topeka a 2-0 lead at 16:04 of the first period on a fluky goal. Topeka appeared to score only moments before but the game continued, only to have Davis fire a shot into the glove of Jones, which was in the net at the time of the save.

But following the referee signaling it as a goal, Davis as well as Topeka’s Brendan Boyd both found themselves in fights with Mustang players.

Topeka’s physicality was part of the reason for Topeka’s success in both of the weekend’s games, according to Langer.

“We’re definitely getting closer as a team and that’s why you’re seeing that [physicality],” said Langer. “You know, when teams are taking liberties at our guys, our guys are starting to stick up for one another and that’s a good feeling.”

Davis had no problem with getting in the mix of things and was proud of his team’s overall play.

“It was a great team effort,” said Davis. “We had a good week of practice and that helped.”

The third period brought an interesting outcome to the game. Topeka continued with the scoring at 7:12 when Michael Hill deflected a Bob Marx shot behind Jones. At the 10:42 mark, Boyd got in his second fight of the night, resulting in a game ejection according to North American Hockey League rules.

Topeka goalie Rasmus Tirronen also wound up ejected at 12:41 after Mustang forward Brad Wilhelm plowed into him, with Tirronen retaliating. Erik Rohrkemper had to finish the game, only having to make one save.

Despite the ejections, Langer thought his team handled their emotions well.

“I think for the most part we were pretty good [with handling emotions,]” said Langer. “We dictated most of the emotional stuff and there were a few times we could’ve gotten down that we didn’t. We just kept firing.”

Justin Hussar finished off the scoring at the 18:31 mark. Topeka ended with a 34-18 shot advantage. Tirronen got the win with 14 saves on 17 shots. Jones stopped 28 of 34 shots. New Mexico had 51 penalty minutes and Topeka finished with 54.

Topeka continues their homestand this Friday versus the Texas Tornado, who have won 14 straight games. The Tornado play Wednesday at

Wichita Falls before Topeka on Friday. Friday is College Night for the RoadRunners, with $1 beers and 10 percent off all tickets for students with a college I.D.