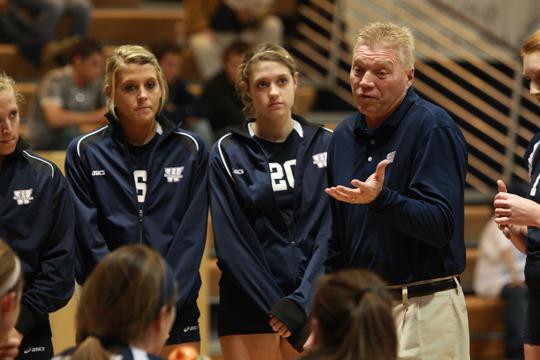 Washburn volleyball head coach Chris Herron directs his team Oct. 29 against Central Missouri, which Washburn defeated twice in regular season but were still seeded below in the NCAA Tournament. “After this season I’ll be going to the annual coach’s convention that will be held in Kansas City,” said Herron. “Believe me, someone is going to get a piece of my mind on this because it makes no sense and we need to get this fixed.”

In an age where football fans of successful college teams despair that factors like polls that are beyond their control can determine if the teams they support play for a national title, it had been comforting then that other collegiate sports have systems that avoid the kind of controversy surrounding Division-I football.

This situation looks to have changed as unexplained reasons have conspired to rob Washburn of what should be a number one seed.

When contacted for comment on the current situation regarding seeding in the south central bracket of the NCAA Division-II women’s volleyball tournament, both the NCAA and the MIAA declined to explain the reasoning behind the seeding as they stand.

So, in the grand scheme of things, the No. 5-ranked Washburn Lady Blues, owners of one of the best records in the MIAA conference, just had the proverbial wool pulled over its eyes.

The selection process that determines seeding within regions is spelled out in the NCAA championships handbook for Division II volleyball. There are four major criteria that determine seeding that are listed.

Of those criteria, the primary determining factor is win loss record. As a coincidence, both Washburn and the top seeded University of Central Missouri Jennies, who also happen to be in the same conference as Washburn, have the same conference record. The overall records though, are where the first divergence between the two teams happens.

Washburn, coming into the post season with a record of 30-2, playing a non-conference schedule that had it traveling to various locations around the region playing the teams that were invited to the tournaments they participated in. In contrast, UCM with a 28-4 record played a non-conference schedule that was arguably harder than Washburn’s but once again the issue comes back to the central point that Washburn’s head coach questions.

“I don’t understand how they get a number one seed over us,” said Chris Herron, head coach. “In the [Official Championship Handbook for Women’s Division II Volleyball] the first criteria is overall record and then head-to-head record. It just doesn’t make any sense to me.”

Indeed, in both head-to-head matchups Washburn proved the victorious team, winning at UCM 3-1 Oct. 15. Washburn then hosted the Jennies at Lee Arena in a hard fought match that finished 3-2 Oct. 29.

The Lady Blues even have another reason to be upset. Even though the rankings don’t factor into seeding system, Washburn is currently ranked No. 5 in the latest American Volleyball Coaches Association poll while UCM remains No. 9 in the country.

So, according to virtually ever quantifiable factor, Washburn should be the number one seed in their region and yet they look up at a team that they have beaten twice this season and if all plays out in their favor, will be three times the revenge in Warrensburg, Mo., the home campus of UCM where the regional will be hosted. Had Washburn been able to secure the first seed, the first three games of the playoffs for the Lady Blues would have been in the friendly confines of Lee Arena.

What is certain is that regardless of how the playoffs end up going, a push to reform will be led by Herron as he seeks to right a wrong in his eyes.

“After this season I’ll be going to the annual coach’s convention that will be held in Kansas City,” said Herron. “Believe me, someone is going to get a piece of my mind on this because it makes no sense and we need to get this fixed.”