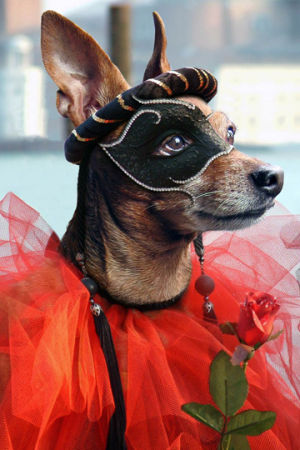 The scariest costume went to a Pekingese named Buster dressed as the devil.  Lucy, a Pomeranian dressed as a chicken, was declared to look most like its owner, who was dressed as Col. Sanders.  A Jack Sparrow Papillon was awarded the cutest costume, and the most original was a Schnauzer named Baby Jay as Jayhawk.

Winners of each category received a six-month supply of Royal Canin or Science Diet food.  The overall winner, a heeler mix named Tasha dressed as a horse, took home a $50 gift certificate to the store.

“It was kind of everybody, but it was mostly [store founder] Maribeth [Hamilton],” said Tipton.  “Just because we’re always trying to do really fun, crazy things, just to get people in here.  Because, like, we are a relatively new store, and people don’t really know we’re her a lot of times.

“So, just anything we can do to, like, bring people in and have them take look at our store and win sweet prizes is always a good idea.  She’s always got those.  Pull them out of her sleeve like crazy.   She’s like an idea genius.”

Tipton was satisfied with the attendance of the contest. and had ideas on how to improve for next year.

“I wasn’t quite sure what to expect, but there were so many dogs here,” said Tipton.  “It was really awesome.  It was a great turnout, I think.

“I kind of want to do the same thing, but maybe, like, have more than four categories, so we can give out more winners, because it was really hard to pick winners.  We can only give away five different prizes and there was, like, 50 dogs here.”

“[Co-owner] Chris [Hamilton] and I owned Petland in Topeka at Fairlawn for 22 years, and we sold it a year ago, this past February” said Hamilton.  “We really had no intention of doing another pet store, but I kind of missed it.  This opportunity came up.

“I’ve always lived up north.  We haven’t had one lately, a full-line pet store across the river, so it was a great idea.  It was a great place.  We got a great deal on the place, so here it is.  And now all my family is old enough to work here.”