Ichabods to face Midwestern State in Topeka for Kanza Bowl 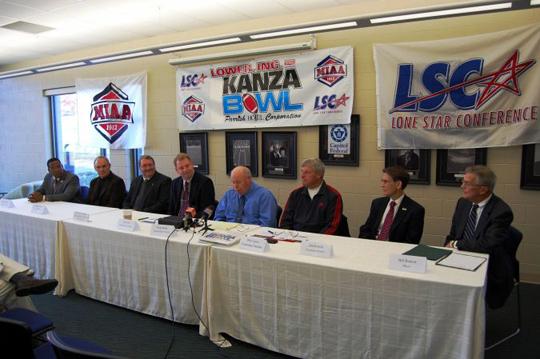 The Kanza Bowl Selection Committee announced Monday morning that Washburn and Midwestern State will be competing in the 2010 Lower Kanza Bowl on Dec. 4. This will be the first time the bowl game, which will take place at Hummer Sports Park in Topeka, will host the Ichabods.

Following a 23-7 victory Saturday against Missouri Western, the Washburn Ichabods football team finished its regular season with a 7-4 record and control of its own destiny.

With the top three MIAA teams – Northwest Missouri, Central Missouri and Missouri Western – making the NCAA Division II playoffs, Washburn was given the opportunity to choose which Dec. 4 bowl game to participate in, either the Lower Kanza Bowl in Topeka, or the Mineral Water Bowl in Excelsior Springs, Mo.

Naturally, the Bods decided to stay close to home, as it was announced Monday morning that they would be competing against the Lone Star Conference’s Midwestern State (8-3) in the Kanza Bowl. The bowl game will mark the ninth postseason game for the school, with its last bowl victory being a 36-33 win against Northern State in the 2004 Mineral Water Bowl.

Last year, Washburn was in a similar situation as the No. 4 team in the MIAA, but only one MIAA team, eventual national champion Northwest Missouri, made the playoffs. Nebraska-Omaha played in the Kanza Bowl and Missouri Western went to the Mineral Water Bowl, while Washburn was held out of postseason play with an 8-3 record.

“It’s hard to say when it goes to a committee,” said Craig Schurig, head coach, following last year’s snub from postseason play. “You’re relying on different voices and different people analyzing different things. We’re kinda putting it in the hands of someone else. We obviously felt, as a coaching staff and as players, that we finished very strong and we had the credentials to really be evaluated strongly for the playoffs. That didn’t work out, so we’re disappointed.”

In a controversial move by the Mineral Water Bowl Committee, the MIAA’s seventh-best team will also be making a postseason appearance. Pittsburg State (5-6) has been chosen to represent the MIAA in the Mineral Water Bowl matchup against Concordia University, St. Paul. The invitation comes as a surprise for several reasons – mainly that two higher-ranked schools, Nebraska-Omaha and Emporia State, were overlooked by the committee. The decision also comes as a surprise because the Mineral Water Bowl has a clause that requires the MIAA representative to have a winning overall record. Nebraska-Omaha, Emporia State and Pittsburg State are all tied with a losing record of 5-6, which allowed the committee to invite whichever school it thought would generate the most income, even though UNO had a better conference record and both teams beat Pittsburg State in the regular season.

“Pittsburg State is very excited to accept the Mineral Water Bowl Committee’s invitation for post-season play. This is a great reward for the hard work and efforts of our players and coaching staff. This will be a great cap to the 2010 season but also an important start to preparations for 2011.”

In the South Central region of the NCAA playoffs, No. 3-seed Northwest Missouri will host No. 6-seed Missouri Western Saturday, Nov. 20, at noon in the first round of the playoffs. Central Missouri, the No. 4 seed, will host West Texas A&M, the No. 5 seed, Saturday at 1 p.m.