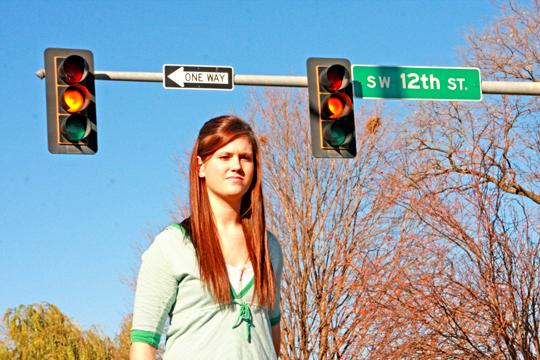 Last month a member of the Washburn community came face-to-face with a situation that opened up their eyes to the community around her.

“I was going to pick up a friend from a house party on Garfield and we just took a route down Lane and then we took a turn on to 12 street,” said McEachern.

As McEachern and her friend began to turn left on a green arrow at the intersection a car came flying past them.

“As we took the turn a car flew past us and stopped abruptly in front of us and a male was driving and then he had to slam on the brakes,” said McEachern.

Once the car that had approached from behind pulled in front of their vehicle, events became more serious.

“Five people got out of the vehicle in front of us and came to my car and started trying to punch in the windows,” said McEachern.

McEachern recalls not reacting quickly enough as the situation unfolded.

“We didn’t react fast enough to get the doors locked so they got into the vehicle and two of them were beating the driver in the face and everything and punching him and trying to get him out of the vehicle,” said McEachern.

While two of the assailants were attacking Meaghan’s friend, she was able to get on her cell phone and call the police dispatch.

“By this time I was already on the phone with dispatch just screaming at them to find our location because I wasn’t aware of what street we were on and just for them to come,” said McEachern.

During the time McEachern was on the phone with dispatch, a female assailant had jumped into the car to attack her.

“Then I realized that there was a female who had gotten in on the passenger side where I was sitting and she was yelling and screaming to put the car in park and she had a knife in her hand,” said McEachern.

At this time she realized that all five assailants had knives in their hands.

“As soon as I saw she had a big knife in her hand, I looked around and all five of the people who were there, there were two females and three males, all had big switchblades in their hands,” said McEachern.

McEachern says the woman began stabbing at her, specifically her hand, in an attempt to get her off the phone. It became apparent to McEachern that the assailants wanted her car.

“They were trying to yank the driver out of the car because I’m pretty positive their intention was to steal my vehicle,” said McEachern.

Afterwards McEachern continued to stay on the phone with dispatch.

“I was on the phone with dispatch and I kept repeating the license plate number and the car and what color and make and everything,” said McEachern. “[The dispatcher] kept asking me where I wanted to meet an officer and the only place I was comfortable with was to be at campus, so I told the officer to meet me in the [Living Learning Center] parking lot.”

Afterwards, McEachern came to the realization that the she came close to being killed.

“Nothing was stolen from my vehicle,” said McEachern. “I was very confused by the fact nothing was stolen because there were two of them beating up on the driver and the one woman with me and the other two just stood there.”

McEachern was also able to help police in their hunt for her attackers.

“I was able to get a pretty good look at the female on my side but not the other two who were beating on the driver.”

Being able to get a good look at least one of the assailants had allowed Meaghan to identify her assaulters at the Topeka police station.

“I have gone to the police station and identified them,” said McEachern. “I don’t know at the current moment if they were caught or not but I know [the police] had some leads.”

McEachern said that her and her friend were not the only victims of the assailants that night.

“That same night actually, the same people had gone and done a few more robberies and had tried to attempt to steal another vehicle,” said McEachern.

Family and friends of McEachern were very concerned for her safety and even questioned her staying in Topeka to go to Washburn.

“My parents were very concerned about my safety” says McEachern. “A lot of people asked me, ‘does this change your idea of going to Washburn next year? Do you feel safe enough in Topeka to even stay there at the school?'”

When asked whether or not she knew 12th and Lane streets was a bad area, McEachern said she was unaware.

“I did not. I’m not from Topeka and I haven’t travelled Topeka very much but I know multiple people who live on 13th street and College avenue so I assumed if they lived there and they commute around there I wouldn’t be attacked.”

McEachern said that her experience has taught her many lessons that she is fortunate to be able to apply in the future.

“I know it’s very important to stay on main streets at night,” said McEachern. “As soon as it’s dark, don’t go on side streets. I’m always very, very cautious. I don’t get gas at night. I know that [Topeka] is a lot worse of an area than I thought it was originally.”

McEachern has also found a variety of ways to protect herself from now on.

“My parents have gotten me mace since then and I’m going to start carrying a bat in my car. I’m definitely taking a lot more safety precautions as to staying safe and making sure I go where I need to go and not go any side streets.”

McEachern also gives some advice for other young women and men who go to Washburn.

“Be aware of the locations that are the worst in Topeka and where you can’t travel after dark without being in harm’s way,” said McEachern. “Make sure you always, always lock your car doors and keep your windows rolled up while you’re driving if you have to drive at night. Be careful if you’re trying to go to and from parties.”