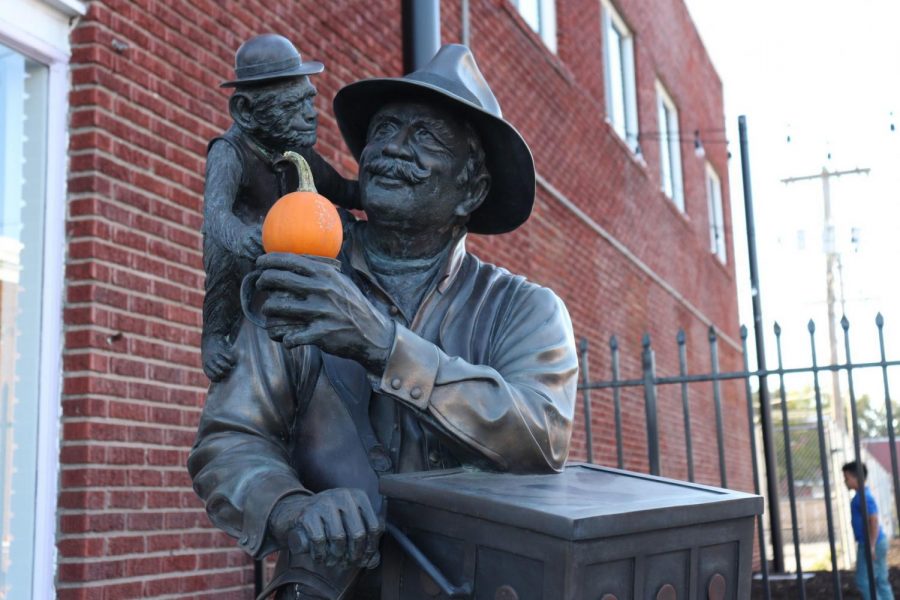 Spooky season: North Topeka is a rapidly growing area with so much to do and see. Pictured is a statue in NOTO.

North Topeka hosted a Fall Fun Fest that gave the Topeka community a chance to support local businesses and charities. In recent years, efforts have been made to reach out and raise awareness of the opportunities present in the budding art district, with the latest being the Fall Fun Fest. On Oct. 18, several NOTO businesses came together to celebrate the season while supporting a good cause.

“It’s a fall festival,” said Heather DiDomenico-Graves, part owner of the Tipsy Carrot. “Every ticket is 50 cents, for every ticket sold the proceeds go to the mission. So basically come out, have fun, bring your family out and give back to the community all at the same time … so it’s really awesome, everybody coming together to put together a community.”

DiDomenico-Graves says that, as a homeless shelter, the Topeka Rescue Mission allows people inside as well as reaching out to kids, and they do a lot of things for the community.

In addition, several businesses had stations set up for face painting. Donaldson’s Jewelers and Amused Gallery had pumpkin painting. Paper June, a children’s bookstore, had painting stations and stickers for younger kids.

Denise Selbee-Koch, co-owner of NOTO Business Dirty Girl Adventures, an outdoor company made for women, by women, also discussed the fall festival, as well as other events that take place in NOTO, which occur on the first and third Friday of each month.

“Our business has live music every first and third Friday, and the district has been working to popularize third Fridays, in addition to first Fridays. And it’s fall and the rescue mission is in need. So Fall Festival is on the third Friday, and all the proceeds from the Fall Festival go to the rescue mission, so we’re collecting cans and cash. And then we, the district, have had donation jars out over the last month, and I think last month they collected … I felt it was $1,000,” said Selbee-Koch.

Referring to Dirty Girl Adventures and Compass Point, the business it is tied to, Selbee-Koch went into detail about the live music scene that NOTO has.

“It has live music for free. Every first and third Friday inside we’re going to do that in November, but we’ll be back outside by April, and we always have food or a food truck of some sort. We might have some special events where you have to do tickets or advanced stuff, but they’ll be inexpensive, or they’ll include dinner. And we would love more young college aged people to come. We have really good bands, ranging from bluegrass to alternative punk.” said Selbee-Koch.

NOTO regular Mindy Hamilton and her family discussed the festival, and overall why North Topeka is special.

“I think there’s a lot of people coming out tonight looking for things to do, and this is a place where there’s lots of things going on. I like it because it’s low key. I like the art district down here and everybody’s really friendly. It has fun shops. We like to just kind of look around. Just friendly people, just like the atmosphere in the artsy part of it. Each time we come down there’s something different,” said Hamilton.

NOTO has mom and pop shops as well as tattoo shops like Matryoshka Tattoo. The Fall Fun Fest is just one example of what NOTO strives to be, and there are several events planned for the future.