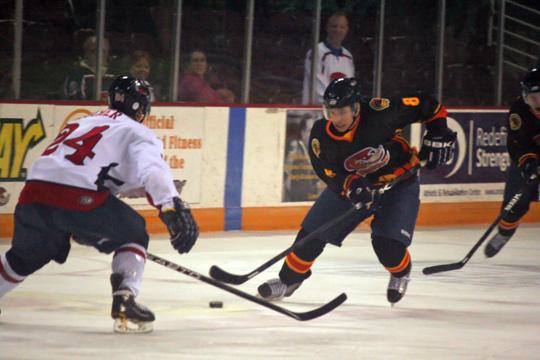 Nate Milam tries to carry the puck into the offensive zone during Friday night's game. Topeka fell though, despite leading going into the third period.

The Topeka RoadRunners took no time to show they wanted to continue their winning streak on Friday night.

But the Amarillo Bulls showed in the third period they had other plans.

Jumping out to an early lead, Topeka coach Scott Langer wasn’t disappointed with his team’s effort much of the contest.

“Those were two solid periods by our hockey team for sure,” said Langer. “We just made a couple of mistakes that they capitalized on.”

But in a third period where the shot total was 12-6 Amarillo, compared to 24-12 for Topeka (13-6-2) the first two periods, that’s where the problems started to mount, according to Langer.

“Amarillo played hard the third period,” said Langer. “And we didn’t get a whole lot of opportunities. It was just a little immaturity from our team.”

After Hill’s early goal that put Topeka up 1-0, the game remained scoreless until Ryan White fired a slapshot past Nikifor Szczerba at the 16:54 mark of the second period. But, the Bulls found their way back into the game at the 4:44 mark of the third period on a turnaround shot from the blue line that found its way through the legs Rasmus Tirronen.

Dan Sherer made it a brand new game at the 11:16 mark when he fired a quick rebound shot into the back of the net.  On another rebound shot, Zack Smoot gave Amarillo the lead at the 15:08 mark.

In a game that Topeka looked to have control of, Langer said this one could come back to bite them in the long run.

“That’s a tough one to lose at home,” said Langer. “This one could really hurt us down the stretch. They (Amarillo) went hard. They never gave up. My hats off to Willie (Dennis Williams) over there on that bench for keeping his guys goin’, but our guys had a lot of opportunities in the second period that we missed the net on. And if we would have capitalized, the game was over.”

Topeka plays Amarillo again tonight at 7:05 p.m. to wrap up a six-game homestand.