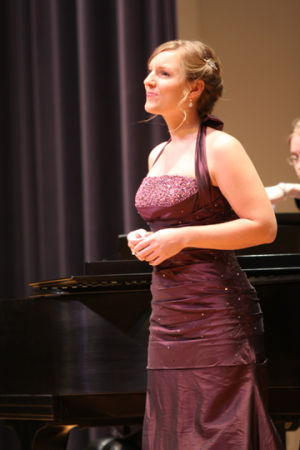 Saturday evening. A young woman stood confident, poised to deliver her best to the audience gathered in front of her.

Welcome to this last weekend’s experience for Emily Charles, a music performance major who gave her senior recital.

Charles, a native of Hiawatha, Kan., is graduating in December with the hopes of moving on to a graduate school where she can continue her passions. However, this opera-lover almost didn’t pursue her musical dreams past grade school.

“Ten years ago, I wouldn’t have gone into music, but I had some really great teachers who encouraged me and saw potential in me,” said Charles. “I think for any musician you have to have somebody backing you up saying ‘you’re really good’ or else you’re not going to have that inner strength to perform.”

She cited Ann Marie Snook, the chair of the music department and Charles’ vocal teacher, as a big supporting influence in her music career.

Snook also was a determining factor in the lineup of songs that Charles performed for her recital. A mixture of German, English, French and Italian, most of the songs were either from an opera or by known opera composers. A few of the sets she chose because she had performed them at previous recitals, said Charles, but others were given to her to learn and memorize only months before.

“Most of it was assigned to me by my teacher [Snook] just because she knows my voice,” said Charles. “I trust her judgment.”

The recital was mostly operatic, showing off Charles’ soprano range with the accompaniment of Cindy Straight, who has been Charles’ accompanist since she first arrived at Washburn. The recital ended with a very unique set,  “Cowboy Songs,” composed by Libby Larsen. The lines of the songs are taken from poems about life in the country, and, fittingly, Charles slipped into a pair of cowboy boots to finish off her performance.

Theo Musick, another Washburn music student, added his percussion styling to her vocal interpretation of the music.

“I love these songs because they’re about a woman who’s from the country, maybe from the Midwest, so I think it makes a nice kicker,” said Charles.

In the end, Charles was sad that her last real performance at Washburn had come and gone since she will probably not be going in-state for graduate school.