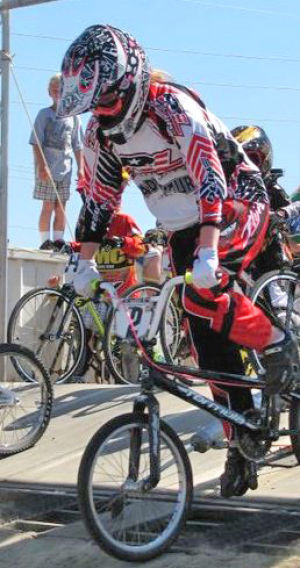 This sounds like the typical profile of a college student, working toward a degree, and working even more to pay for said degree.  Now, add in the full-time hobby: amateur Bicycle Motocross (BMX) biker, This is the life of Washburn student Bridget Walter.

Born and raised in Topeka, Walter was introduced to BMX 12 years ago when her twin brother, Devin, began participating in the sport.

“My brother started racing a year before me, and I went to all of his races.  I decided I wanted to try it out, too,” said Bridget Walter.  “I didn’t like it that much at first because I didn’t really care about it.  I was just doing it because my brother was doing it.”

Her enthusiasm grew gradually.  Today, Walter’s entire family is involved in the sport.  Her parents took over—and now run the local BMX track, Heartland BMX, where she and Devin help out.

“[Running the track] is gratifying because you get to go out there and do all the work and you get to see these little kids come out and race,” said Michael Walter, Bridget’s father.  “Some of them are slower and some are faster, and then all of a sudden, one kid will get it.  They get this fire in their eyes and they start to really want to compete.  It makes it all worth it.”

On top of school and work, Walter practices once a week, for two hours, and races once a week.  BMX bikers stay in shape by training in the areas of weight lifting, plyometrics, and sprints.

The BMX season runs from March to November, giving bikers a break through the winter months.

Locally, BMX interest is small, so for most competitions, Walter and her brother travel out of state.  To date, they have competed throughout the Midwest, as well as in New Mexico, Florida, South Carolina, Texas, Wisconsin and Minnesota.

Since local races are sparsely attended, Walter finds herself competing against her twin, but when asked about sibling rivalry, she jokingly explained.

“My brother usually wins, but that’s better than racing someone slower because I’m constantly trying to keep up,” said Walter.

Margaret Walter, Bridget’s mother, agreed that sibling rivalry is not a real issue, attributing this geniality to the fact that they are two siblings not of the same sex.

“When it comes to the nationals and big races, where it really counts, they aren’t in the same class, so it isn’t so much of a problem,” said Margaret Walker.

“I think just being able to watch the kids race and do well is my favorite part of the sport.  I really enjoy most the aspects of it.  I like meeting new families and hanging out with them whenever we see them at a national.  Just the whole experience.”

Both Walter children are sponsored by Redline Bicycles, a manufacturing company, and Adventure Bicycles, a shop based out of Minnesota.  The sponsorships include bikes, parts and uniforms.  Each racer competes on two bikes, the Class or 20-inch wheel bike, and the Cruiser, or 24-inch wheel.

“A national competition takes all weekend, said Bridget Walter.  “There will be practice Friday afternoon, and a pre-race on Friday evening.  Then practice Saturday morning.  National No. 1 is Saturday afternoon, and National No. 2 is on Sunday.  There are two qualifying rounds, and then the main event.  There are usually 1,000 racers, give or take, at each national race.”

For each race a biker participates in, he or she accumulates points, which are how rankings are decided.  Points earned in local races accumulate to create a district ranking, and national competitions do the same for nation ranking.  Along with points, all races give trophies to the winners.

Devin Walter explained that BMX has its definite advantages over other more-common sports.

“Everyone gets to shred.  There is no sitting on the bench here or waiting for someone to pass you the ball,” said Devin Walter.

So far in the two Walters’ careers as amateur BMX bikers, they have had the opportunity to meet numerous professional BMX bikers, including two athletes who competed in the most recent Olympics.

“We met Kyle Bennett and Donny Robinson, and they were really cool guys.  They’re   sponsored by companies like Nike and McDonalds, so they’re big names,” said Bridget Walter.