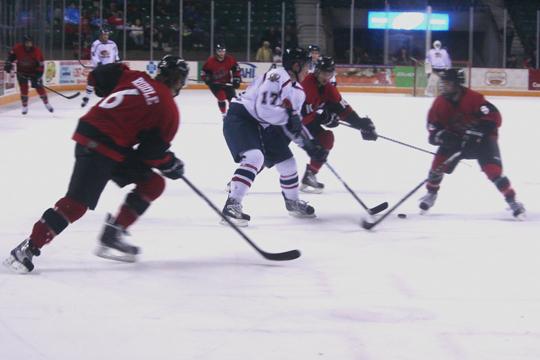 For the first time this season, the Topeka RoadRunners were in a scoreless draw going into the third period. And it was late game heroics that eventually brought them a victory.

Goalie Rasmus Tirronen stopped 24 of 25 shots, newcomer Alex Vazquez had a goal, and Brian Christie scored with only 10 seconds remaining in the contest as the Topeka RoadRunners defeated the New Mexico Mustangs 2-1 Friday night at Landon Arena.

With the game deadlocked at one, Christie took a pass from Andrew O’Leary, deked past Mustang goalie Marco Weiser and fired the puck into the back of the net. Christie emphasized how important tonight’s victory was for the team, especially as the North American Hockey League South Division becomes increasingly competitive

“It’s huge to get these two points,” said Christie. “Everyone else has been losing points in the division right now and we’ve got to come out each game and do what we have to do.”

Topeka (18-7-2) played the match without their team leader in points, Michael Hill, who was coping with an injury. Topeka coach Scott Langer said that really made a difference in his team’s gameplay for part of the game.

“The continuity in the lines are a little screwed up with Mike being out and guys having to move around,” said Langer. “It’s tough when you only have four days to practice with one another. Things were a little different.”

After a scoreless first period, New Mexico (8-19-3) looked to have scored at the 6:19 mark of the second period, but it was waived off due to a crease violation. The Mustangs also had multiple odd man rushes in the period, but were stymied by Tirronen. Langer said Tirronen made saves on numerous shots during the game that showed his capabilities as a goalie.

“He proved he was a Division I caliber goalie tonight,” said Langer. “He had to face some chances that were huge. In the second period, they had about six, seven odd-man rushes that he probably had no business saving. With a veteran like that, that’s what we need during these times.”

Vasquez’s goal found its way past Weiser at the 4:43 mark of the third period for the first goal of the game. At the 15:00 mark, a scramble in front allowed for a tying goal from New Mexico’s Adam Chapie before the eventual game-winner from Christie. New Mexico now drops to 0-10-3 on the road for the season.

Despite a rough first two periods from his players and struggles with consistency, Langer was overall happy to pull out the victory.

“We talked about in the third period that if we find a way to win, everybody’s just going to forget about those first 40 minutes, and our guys did that,” said Langer.

The RoadRunners and Mustangs tangle again Saturday at 7:05 p.m. Fans are encouraged to bring teddy bears to the game for the Teddy Bear Toss, which will take place following Topeka’s first goal, with all teddy bears going to the Topeka Rescue Mission.