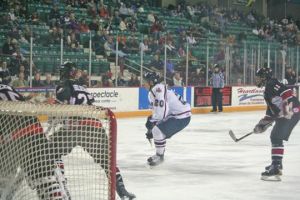 The Topeka RoadRunners have had a lot of clutch goals scored this year, but normally, it’s from likely players. Thursday night’s clutch scorer was a bit of a different story.

After allowing two goals past the halfway mark of the third period to force the game to overtime, Topeka eventually knocked off the Wichita Falls Wildcats 4-3 on a shootout game winner from defensemen Joe Van Antwerp.

Van Antwerp, who has scored only three goals in 25 games this season, put his wrist shot glove side on Wildcat goalie Tyler Green with the shootout tied at three apiece.

Knowing the pressure of the final shot, Topeka head coach Scott Langer mentioned how calm Van Antwerp stays in pressure situations, which is part of his reasoning in selection him to shoot.

“I just went with my gut (in selecting Van Antwerp,)” said Langer. “He’s a kid whose heartbeat doesn’t get up too high and I knew that he wasn’t going to feel it (the pressure) and was just going to go to work. He works on that kind of stuff. He’s got good hands. He’s a solid player and was probably our best forward tonight, so why not go with that?”

Van Antwerp, despite practicing weekly on the shootout, wasn’t actually expecting his name to be called when Langer picked him as the final shot.

“To tell you the truth, I wasn’t really expecting to get the call to go out there, but when coach said my name, I was excited and buried the shot,” said Van Antwerp.

Kyle Sharkey, Brian Christie, and Justin Hussar also scored in the shootout for the RoadRunners.

Newly acquired Davey Middleton scored Topeka’s first goal at the 14:45 mark of the first period on a redirected shot from Chris Bond. It was Middleton’s fourth point in only his third game with the team, after only registering two assists in 18 games for the Tri-City Storm of the United States Hockey League.

A scoreless second period led to a wild third period which included five goals. Kyle Sharkey got a shot past Green just 12 seconds into the period to push the lead to 2-0, but Wichita Falls (17-16-4) came right back with a goal 20 seconds later. Daniel Dupell was able to give Topeka (26-8-2) a 3-1 lead with a wrist shot at the 1:53 mark.

But Topeka goalie Eric Rohrkemper ran into some bad luck allowing two goals just 21 seconds apart at the 13:48 and 14:09 marks of the final period to force the game to overtime.

Despite his team giving up two late goes, Langer was also quick to credit Wichita Falls for their effort in the game.

“You’re never happy when you give that kind of lead up,” said Langer. “Things just didn’t go our way for most of the game and a lot of that can be attributed to the work ethic of (Wichita Falls.) They back-checked pretty hard and didn’t give us a whole lot of opportunities on the chance chart.”

But despite the close game, Topeka still picks up two points in the standings, and with a Texas Tornado loss to the Fairbanks Ice Dogs Thursday night, Topeka now holds a three point lead on Texas in the division.

Langer emphasized this in his final evaluation of the game.

“We’ve got to take the two points,” he said. “We have been playing some good hockey, and tonight obviously wasn’t one of those games, but to stay in the top spot is important. We could have easily sunk down on the bench and gave those two points away.”