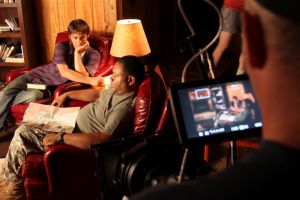 A woman and her teenage son travel up a dry dusty path before coming to a halt outside of a small cabin-like ranch house. On the porch stands an older man, whose knitted eyebrows mark him as grouchy, and unsympathetic.

Thus is the introduction of three-quarters of the main characters in “High Value,” a local film set 40 years in the future, in western Kansas after the Ogallala Aquifer has dried up.

Melia (played by Tracy Graybill) and her son, Aiden (Christian Hasse), have been traveling from Las Vegas to Chicago, but are held up in western Kansas when their car is stolen. They intrude upon the solitude of Elam (C.J. Johnson), an eccentric farmer. Or, he had been a farmer, until there was no water left. Later on in the film, Elam’s friend Josh (Steve Matlock) is introduced and it becomes apparent that Josh and Elam are guarding a secret.

Chuck Cranston, a professor of mass media at Washburn University, wrote, directed and co-produced the film. He said the character developments came from a series of discussions that he had with co-producer Christina Nico Pope in the spring of 2009.

“At that time we were talking about doing a documentary of sort about climate change,” said Cranston, but they didn’t feel that they had the budget for a documentary. They wanted to localize the potential environmental problems, and so began the idea of a feature film.

After developing the scenario, Cranston worked on the characters, focusing a lot on Elam and his back-story. He found the idea of a rugged, Clint-Eastwood-esque character intriguing.

“He’s a very careful individual,” said Cranston. “He has what you might call a character arc. Initially he’s not someone that you might identify as being good.”

One scene that develops the drama quite a bit is when Elam, Melia and Aiden sit down for a meal. Elam talks about rationing and a water shortage, and Melia hands him a handful of crumpled bills for the two glasses of water that she and her son are drinking. Cranston said that it is this scenario that best demonstrates the crux of the story.

“The reality is that they’re living in a time where people are paying quite a bit for water,” said Cranston.

When he and Pope were first developing a setting for the film, Cranston said the ecosystem was a big concern, but global warming and climate change were pretty broad topics to look at, until they saw a few articles about the Ogallala Aquifer, which supplies much of the Midwest’s water.

“We decided to take the idea of the Ogalala Aquifer, and look at some of the research,” said Cranston. “Scientists have been saying that it could potentially dry up in the next 30-40 years. In fact by 2042 if the current usage continues…it will be gone.”

From southern California to western Kansas would be the region hardest hit by this situation, said Cranston, however he was unable to shoot it in that location when he filmed this summer.

“It was actually filmed in the flint hills, which is central rather than western Kansas,” he said. “One of the things you don’t see in the film is a real wide angle shot of where it is because…there were some hills.”

The inability to choose the “ideal” location didn’t put them off much, though, said Cranston, because, even with a research grant from Washburn University, the film’s tight budget didn’t have much wiggle room.

“With this kind of a budget, you have to ask ‘Do we want to spend it on location expenses or on crew or actors or what?'” he said. “I felt that we had good actors. They were very easy to work with. Sometimes when you hire people who are in the business and well-known, you have to deal with all their people.”

Although the hills were an unpleasant giveaway, the actual production part was fairly painless, and was accomplished in four long days of shooting. They shot it at Flying Wranch, where they slept in the cabins and were catered with gourmet food.

“I find if you provide all the creature comforts, if you make everybody happy, generally everything works,” said Cranston.

With a crew that included Washburn students Brenda Blackman, Zak Pauls, Arissa Utemark and graduate Kevin Mitchell, the filming went fine and Cranston was able to edit the digital files this fall, with the first public screening on Dec. 9 at College Hill Theatre.

Although Cranston said he hopes to have another screening soon, his priority will be entering “High Value” in film festival competitions over the next year.