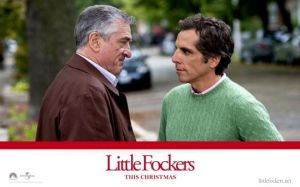 hideThe story of Gaylord “Greg” Focker, a decade in the making, began at the turn of the century with “Meet the Parents,” when the main character, played by Ben Stiller, first meets his girlfriend’s parents and tries to work up the courage to ask for her hand in marriage.

In the third installment, “Little Fockers,” Greg and his wife Pam, played by Teri Polo, are busy trying to raise twin children, Henry and Samantha, while pursuing their careers and somehow trying to find time for each other in the midst of all the other pandemonium. After suffering a minor heart attack and self-defibrillating, Jack Byrnes becomes worried about the state of his family. With his other daughter Debbie getting a divorce, he turns to Greg to become the patriarch of the family, the “Godfocker.” Matters become complicated, however, when bombshell pharmaceutical rep Andi Garcia, played by Jessica Alba, hangs on to Greg too much and Jack suspects him of cheating like his former son-in-law Dr. Bob.

Garcia talks Greg into representing an erectile dysfunction drug called Sustengo, which is supposedly the first E.D. medication that is safe for patients with heart problems. She talks him into speaking to a group of doctors about the drug, and urges him to sell the pill by telling personal stories to relate with the audience. Greg goes on a rant about his father-in-law, which later becomes a hilarious YouTube video and even gets remixed, and Garcia’s admiration for Greg’s “superstar” abilities leads her to fall for the married man.

All the while, the family is preparing for the twins’ birthday party, and Greg tries to get his children into a prestigious school. When Pam’s former lover Kevin, played by Owen Wilson, comes back into town after his marriage proposal is turned down by his current girlfriend. His arrival leads to jealousy on the part of Greg, and he once again finds himself vying for Jack’s approval.

After Jack wrongfully believes Greg is having an affair and tells Pam to go for Kevin instead, Greg finally has enough and leaves the house to stay at their new house, which is still under construction. Garcia once again comes into play and after getting drunk and taking a few Sustengos, tries to seduce Greg. In the end, however, he sees that family is the most important thing to him and comes back to the party, only to get in a fist-fight with Jack, who thought he witnessed Greg cheating on Pam with Garcia.

This movie, while certainly filled with hysterical moments not only by the regulars but also by the children, lacks some of the creative flair of the first two films. It adds relatively nothing new to the story, instead working off some of the gags of the other two movies to get laughs. Once again, Greg is seeking the approval of Jack, even though he has proven countless times that he is trustworthy. However, the one interesting aspect of the film is the character development of Greg, as he has become much more confident in himself around Jack.

I would definitely suggest seeing this movie, although it can probably wait for the cheap theater.