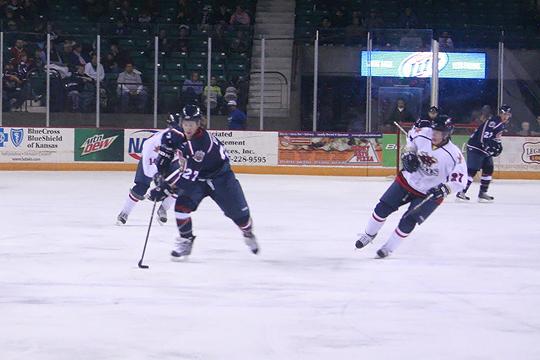 Jordan Davis carries the puck across center ice and into the offensive zone Saturday night. He registered an assist on Kyle Sharkey's first period goal.

Saturday night marked an important matchup for the Topeka RoadRunners.

Playing North American Hockey League South Division rival Amarillo, Topeka fed off a late third period save on a penalty shot to keep the game tied and eventually squeaked out a 3-2 victory in a shootout.

Playing without leading points scorer Michael Hill after he was ejected from the game the night before, Topeka (20-8-2) stayed composed after giving up two first period goals. RoadRunner goalie Erik Rohrkemper did not allow a goal, including in the shootout, for the remainder of the contest.

A win over Amarillo (21-5-3) means the Bulls only gained one point on Topeka in the standings over the weekend. After having trouble knocking off Amarillo this season, Rohrkemper said the win was important for the team.

“It felt amazing,” said Rohrkemper. “That team’s been a thorn in our side all season long, so just to get a win in that fashion was unbelievable.”

Topeka got on the board at 16:22 of the first period off of a turnaround shot by Kyle Sharkey to tie the game at one, but a goal at the 17:43 gave the Bulls the advantage going into intermission.

A power outage delayed the beginning of the third period for a consecutive night. Still deadlocked at two, Amarillo was awarded a penalty shot with less than five minutes left in the third period. After a Rohrkemper save, Topeka also came close to taking the lead in the final minute of the third period but Amarillo’s Steve Bolton kept the puck out of the net to send the game to overtime.

Following the scoreless overtime, Bob Marx and Christie both registered goals in the shootout as Rohrkemper stopped all four shots he faced to preserve the victory.

Topeka now starts a five game road trip, beginning in Corpus Christi this Thursday. Langer said he could see a few areas his team needs improve before that series.

“We’re still a little rusty after the break and you can tell,” said Langer. “We turned the puck over in bad areas of the ice and that’s the only time they generated offense on us. So we have to clean that up this week because we have a short turnaround with that trip because we leave Tuesday.”