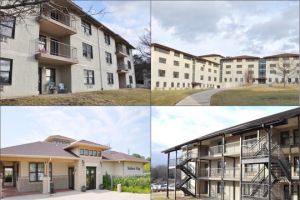 Beginning July of last summer, rooms in the Living Learning Center, Kuehne, West halls and the Washburn Village apartments were at capacity, resulting in students being placed on a waiting list and having to find different housing off campus.

Fortunately, things are looking better for Washburn residents this spring. It appears that many of the students who were on the waiting list may have filled out their contracts early in order to ensure their placement for this spring. This explains why several of Washburn’s living facilities reached capacity so quickly.

“We still had a waiting list coming into the spring, but a lot of them were wanting spring contracts, they just wanted to be the first in line for that, so I think there was just a larger list to work with this year then we’ve had in the past,” said Mindy Rendon, director of residential living. “There’s a stronger list of people wanting to know that they’ll get rooms.”

In addition, things have improved for students who are already living on campus. While Washburn living facilities were at capacity, students were unable to trade rooms if they were unhappy with their living situation. Now, depending on which building they are in, it will be possible for some students to trade rooms.

“It depends on what building you’re in, but generally speaking, sure,” said Kate McCown, assistant director of residential living, when asked if it would be possible for a student to trade rooms if necessary this semester.

“The way we place students is based on when your contract is received,” said McCown. “That’s how we placed in August, that’s how placed in January. In terms of who gets priority placement, it’s just simply by the date that you turn those in, so that resulted in very few students having to live with hosts, and some of them decided to stay with their hosts. We did have some move on campus and we were able to place them.”

McCown also had some advice for students who are interested in living on campus during the fall of 2011.

“Get your contract in early,” said McCown. “We can’t say that enough. We don’t have really any sort of priority deadline, but our contracts are available March 1, and the sooner you get them in the better.”

She went on to mention that students who have lived on campus before have a week priority so that they can get their specific room and facility.

For students interested in living on campus in the fall of 2011, the Residential Living office will be taking both applications and deposits online. This will make the process of completing your contract relatively simple.

“I think it’s going to be a great service for students, because they’ll be able to do it online and you’ll also be able to pay your deposit in a similar fashion that you pay your bill now, or your addition fee and things like that, so it’ll be through that payment system as well, so we’re really excited,” said McGown. “I think it’s going to help us serve students better, and hopefully will be a better process for the students than the paper, which gets cumbersome.”