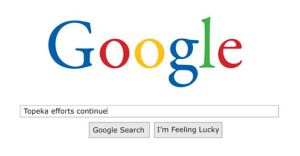 Since roughly this time last year, Topeka has waited in anticipation of the decision to come regarding Google’s fiber wire project and where they intend to place their new technology.

The original announcement from Google was scheduled Dec. 15, 2010 but as the date continued to approach, the California-based Internet power was silent on where they would place their revolutionary technology.

For those who are unaware, 2010 to some degree has been the year of Google in Topeka.

Jared Starkey, co-founder of Think Big Topeka started up a Facebook page that was exploring the possibility of getting Topeka involved. He instigated the process originally.

Some of the early members of the organization came upon it by complete accident.

“I was just surfing through the Internet and stumbled onto this page about the Google project,” said Alissa Sheley, member of Think Big Topeka. “By the time I joined, I was number 48 on their page. Eventually, some of our other friends started saying on Twitter, ‘Alissa and Brandon [Sheley] should bring Google to Topeka’ and at that point, it was game on.”

Sheley made phone calls and brought in help to get the effort rolling.

“I called Jim Ogle, station manager at 13 News,” said Sheley. “Jim is all about Topeka, so once he got involved things just started taking off.”

Among the things that took off quickly were the efforts to do what had been mentioned as a “Google Day,” renaming Topeka to Google as a bit of a publicity effort. After proposing to the city council that there be such an effort, the group of grassroots activists received a surprise.

“We had originally asked for a week from the council thinking they would come back with an offer of a day,” said Sheley. “So we were pretty blown away when they came back and said, ‘let’s just make it Google for a month’.”

Through various efforts that followed, members of the Washburn community have lent their personal support to efforts to bring Google to Topeka. Among those is Kevin Halgren, assistant director of information and systems services department.

“I think it’s important because it would put our community at the cutting edge of technology,” said Halgren. “Part of the reason Google wants to do this project is to give the community a chance to experiment with it and come up with ideas for how we can use the Internet that maybe no one has thought of before.”

For the Washburn campus itself, the Internet technology would not have a direct effect on the school’s current Internet access. Washburn is currently part of the Kansas Research Educational Network (KANReN) that provides a high-speed Internet connection to many of the major universities in the state of Kansas at speeds comparable or even faster than what Google is providing in their fiber wire project.

“I think we really haven’t even begun to see what would be capable with that technology available for the surrounding community,” said Halgren.

In the meantime, Topeka continues to wait for a decision while Google extends the time frame for decision. Google announced they are taking more time to consider the process in addition to dealing with change in leadership at the top as they transition to a new CEO of the company.

“I’m sure they have a lot to consider right now,” said Sheley. “We’ve been getting them more specifics on how friendly our community is to new business and things like that. We’re just waiting to see what happens but in the meantime we will continue to do what we can to keep things rolling on this.”