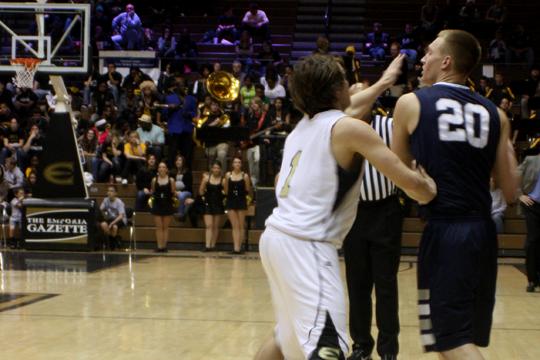 The Ichabods will look to build off their remarkable 69-56 road win over Emporia State. The Washburn Ichabod basketball team returns to action in tonight’s game in Lee Arena where they jockey for position in the MIAA conference standings.

Although the Ichabods proved last year that a team’s seed in the conference tournament is merely a number and does not justify how the team will finish, an easier road would be ideal.  The Ichabods are in a tie for third at 6-4 in the latest MIAA rankings with an overall record of 9-5.

Through the first six games of the season the Ichabods were 5-1 and undefeated in conference play; a significant improvement from last year’s 1-7 conference start.  Consistency is the only factor holding thr Ichabods back from reaching team expectations.

“It starts with defense”, said Bobby Chipman. “For the most part, we are doing everything we want on offense but still need to become more consistent on the defensive end.”

Washburn learned a lot about its team after a grueling three game exhibition slate where the Ichabods travels began in Allen Fieldhouse and ended in Las Vegas against UNLV.  The Ichabods fell short in all three games, but the point of the exhibition season is to work out the kinks and hit the ground running when the regular season comes around.

The Ichabods regular season started with two home wins before they made a trip to Phoenix for the Grand Canyon Thanksgiving Invitational where they finished 1-1.  Entering conference play the Ichabods triumphed 79-73 against Nebraska Omaha, avenging last year’s loss in the finals to the Mavericks.

It has been a series of streaks for the Ichabods this season.  After starting the season 5-1, the Ichabods lost three straight games with a culminating 82-103 shootout at the hands Missouri Western.  Washburn shot just 40 percent in their three game skid, below their 47 percent season average.  The Ichabods made another quick turnaround winning four of their next five games, vaulting them to 9-5 overall and 6-4 in conference; once again demonstrating adversity can bring a team closer together and catapult them to their expected level of performance.

“Right now we are taking things a game at a time and not trying to focus on where we stand in the MIAA,” said Chipman. “Thinking about what we need to do to win each game is more important.”

Every championship contender must have senior leadership that paves the way for everyone else on the team.  Senior leadership has not been an issue for the Ichabods this season.  Logan Stutz has had a breakout year for the Ichabods, averaging 21 points and seven rebounds a contest.  Stutz’s season was jumpstarted with a career-high 38 point performance against Grand Canyon University.

De’Andre Washington is also having a breakout year for the Ichabods, averaging 16 points and hauling in seven rebounds per game.  A noteworthy addition to the Ichabod roster this season has been freshman transfer Jeff Reid.  Reid has been stellar in his inaugural season for Washburn, averaging 11 points and being the main three point threat.  Reid has shot an astounding 46 percent from behind the arc, going 31-68 and adding a much needed weapon to the Ichabod arsenal as tournament time looms in the distance.

“Dre and Logan have led us all year on offense and have challenged us to become better defensively and Jeff has been the elite scorer we expected him to be as well as being a key role in our success this year,” said Chipman.

The Ichabods’ next challenge is a matchup against Lincoln University to night, the last time Washburn has played Lincoln at home since 2004.