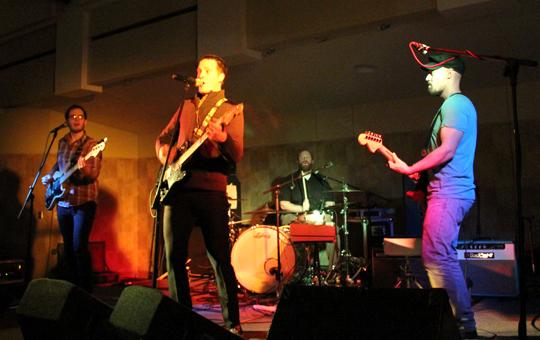 Rock band Starlume plays in the Washburn room Thursday night as part of no name calling week. The band is originally from Nashville, Tenn. and tours throughout the Midwest and Southern United States.

Not known for its rock and roll scene, Topeka was given a rare, unexpected treat.

With a sound that was at times melancholy, at times upbeat, Starlume rocked a show that featured brand new tracks with a mix of familiar favorites that Washburn students embraced. The audience kept trickling in throughout the show and those that made the trek weren’t disappointed as the band from Nashville, Tenn. gave a performance worthy of some of their influences.

Starting off with the song, “get found” the band took the audience into a sound that was reminiscent of British band Coldplay as the song featured some unique drum beats that gave it a sound that was stylistically close but yet different as they worked through the song that featured intense sounds from lead guitarist Nate Woodall. The band would continue through their set with a Tom Petty cover that the audience responded to.

In between songs the band worked in their style of interplay between themselves and the crowd joking about writing songs on the trip to Topeka. The thing that took the band most by surprise were the current conditions in the capital city.

“Man you guys have like six inches of snow on the ground,” said Landon Rose, lead singer. “We get like a quarter inch in Nashville and the town shuts down. Game over man.”

The band continued into the set with the song, “angel of the sea” that took on a melancholy sound that was almost Irish folk music mixed with a little bit of a dissonant chord sound that gave the song almost a quasi-middle eastern influence that left the audience spellbound.

Taking the music into a new direction, the band then busted out a cover of Ceelo’s “Crazy,” getting the crowd involved with the audience chiming in on the bridge and helping to build the energy in the room.

The band then finished up the evening with a cover of iconic band U2’s “Where The Streets Have No Name” that paid homage to the band from Ireland and yet allowed them to put their own touch with a strong performance from both Bassist Isaac Wriston and Woodall.

Afterwards, the band spoke about how their performance fit into, “No Name Calling” week in their minds.

“Even though we play with a lot of energy and our sound can be pretty strong, we like to sing and play uplifting music,” said Woodall. “It’s just awesome that we can be a part of something like that kind of uplifting event.”

The band also felt a positive energy in the way Washburn students responded to their performance.

“In Nashville a lot of people go somewhere to meet and so we’re just the background music for them,” said Wriston. “It’s awesome to see people who are there watching you and listening. You don’t see the glow of cell phones on their faces. They just came to listen and that’s awesome.”

The band will be in Joplin, Mo. over the upcoming weekend before they head home to Nashville to prepare for a trip to San Antonio, Texas. For more information on Starlume check out their official website at www.starlumeonline.com and follow them on facebook at www.facebook.com/starlumeband.